What is it with all the aliens lately? Towards the end of last year, we brought you the story of the strange monoliths that keep appearing and disappearing around the world.

Not only that, we covered an Israeli defense chief’s claim that aliens exist but they’re just media shy. In one of these stories, we asked a specific question that we’re coming back to here.

More specifically, in our article about the first monolith found in a Utah desert, we said the following: “If there were regular extraterrestrial visitors to Earth, you’d think they’d leave behind otherworldly sandwich wrappers or something.”

Clearly, our writers are blessed with the gift of foresight. Apparently, they have now found the alien garbage we were asking for.

Avi Loeb, chairman of Harvard University’s Department of Astronomy, agrees with our vision. He says that when we find the first sign of extraterrestrial life, it will be a piece of their trash.

He goes on to say that such a piece may just have drifted into our solar system. He believes the object to be not just a hunk of rock, but some kind of alien technology. 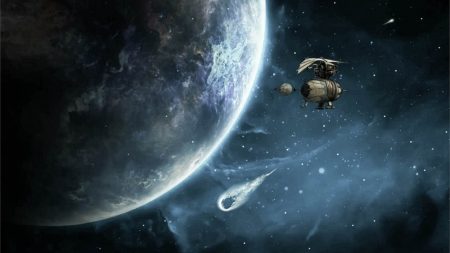 Popping in for a Visit

The mysterious object – fairly small for a space drifter at 100 yards long – entered our system from the direction of a nearby star Vega in September 2017. We say “nearby”, but that too is relative as Vega is some 25 light years away.

By the end of September, the object had traveled past the Sun and Venus. In October 2017, it zoomed past Earth, before heading towards the Pegasus constellation “and the blackness beyond,” says Loeb.

It was detected by the Panoramic Survey Telescope and Rapid Response System (Pan-STARRS) in Hawaii. It’s no wonder that this was what noticed it – Pan-STARRS is the highest definition telescope in existence.

Since the object was detected in Hawaii, it also received a Hawaiian name. Its founders named the interstellar traveler Oumuamua, which translates into English as Scout.

Isn’t that a bit common? This author’s neighbor had a dog with the same name, for Pete’s sake.

We Don’t Need Another Comet

Anyhow, Oumuamua came and went without much fanfare. You’d think that such a brief visit wouldn’t be of much interest to anyone.

The science community disagrees. Over the 11 days that they managed to observe Oumuamua, they got some interesting data, even if they never managed to get a clear picture of it.

Oumuamua is the first interstellar object detected in our solar system. There have absolutely been others before it, but this is the first one we noticed.

Despite its significance in that regard, scientists were ready to dismiss Oumuamua as a regular comet. Loeb, however, didn’t think that would be right.

According to him, we shouldn’t let “the familiar define what we might discover.” To illustrate his example, Loeb brings up cavemen and cell phones.

“What would happen if a caveman saw a cellphone? He’s seen rocks all his life, and he would have thought it was just a shiny rock,” says Loeb in New York Post.

‘A One in Quadrillion Chance’

But what could lead a man of science to come to such a farfetched conclusion? Loeb says that there’s plenty about Oumuamua that supports his theory.

First of all, Oumuamua is pretty weirdly shaped. Although they got no pictures, scientists were able to determine the object’s shape by observing light reflecting off it as it spun around in the void of space.

They concluded that Oumuamua is shaped much like a cigar. Based on their calculations, it had to be between five to 10 times longer than it was wide.

“This would make Oumuamua’s geometry more extreme by at least a few times in aspect ratio — or its width to its height — than the most extreme asteroids or comets that we have ever seen,” Loeb says.

Not only that, Oumuamua was around ten times brighter than a typical asteroid or comet. It reflected light almost as if it was made out of something shiny… Like metal.

But the most impressive thing about the object was how it moved. Oumuamua passed pretty close to the Sun, and according to astronomers’ and physicists calculations, the gravity of the Sun should’ve flung it away at a very high speed, only for it to slow down soon after.

Oumuamua didn’t do that. Sure, it accelerated a bit when it passed the Sun, but nowhere near as much as physics would dictate.

There was only one explanation for this. Oumuamua must’ve been propelled by a force other than just the Sun’s gravity – perhaps an engine.

These facts led Loeb to conclude that there was a one in a quadrillion chance that Oumuamua was just a comet. Instead, the object has to be some kind of an alien construct, he says.

One Man’s Trash, Another Man’s Treasure

So what could Oumuamua be then, and what is its purpose? Loeb has some theories.

Based on the calculations, Loeb says that Oumuamua might not actually be cigar-shaped, but a large disc less than a millimeter thick. As such, it resembles a technology we have on Earth – a light-sail.

This technology is used to propel objects through space. It consists of a thin sheet that captures particles spewed out from the sun and transforms them into motion energy, like a ship’s sail.

Loeb doesn’t dare guess what Oumuamua’s purpose is, though. According to him, it could be space junk that once served as a navigation buoy for a spacefaring civilization.

The original Oumuamua research team has dismissed Loeb’s theories as nonsense. He, however, believes he is right.

“Some people do not want to discuss the possibility that there are other civilizations out there. They believe we are special and unique. I think it’s a prejudice that should be abandoned,” Loeb says.

Instead, he suggests that we keep scouring the universe to find more signs of alien garbage.

“The only way to look for alien civilizations is to look for their trash, like investigative journalists who look through celebrities’ trash,” he says.

Wow. It sounds a lot less impressive when you put it like that.