We’ve covered our fair share of research and high-ranking opinions on topics that approach science fiction, from the possibility of UFOs existing to robots helping old people fight depression. This one, though, might be the most out-there story of them all.

Time travel is one of science fiction’s favorite tropes of all time. The ability to go fix the mistakes of the past or see the wonders of the future has inspired hundreds of novels, movies, TV shows, and who knows what else.

In media, though, time travel – especially the kind that goes to the past – often comes with an important caveat. Time is a delicate construct, and you absolutely, positively must not do anything to disrupt its flow.

You know the concept. It’s why Marty McFly had to make sure that his parents end up dating in high school – otherwise he himself would never be born at all.

But now, a fresh study by scientists at the University of Queensland, Australia, posits that not only is time travel theoretically possible, it could be paradox-free.

Published in the journal Classical and Quantum Gravity, the study states that the universe is stubborn about how things have played out. No matter what a time traveler would do, events would work their way around it and play out the way they historically did.

Wow, that’s… That’s actually kind of bleak. Does that mean that whatever we do is completely predetermined by the cosmos?

Let’s get on with the story before we go any further into an existential crisis. 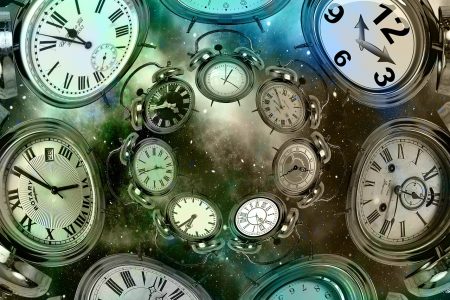 The study’s lead author Germain Tobar, a fourth-year Bachelor of Advanced Science (Honors), set out to resolve one question with his research.

“I wondered: ‘Is time travel mathematically possible?’,” Tobar said in a statement.

There are some high mathematics-based issues when it comes to time travel, according to Tobar. These problems are grounded in to prevailing theories physics has about our universe – classical dynamics and Einstein’s famous theory of relativity.

“Classical dynamics says if you know the state of a system at a particular time, this can tell us the entire history of the system,” explains Tobar.

“For example, if I know the current position and velocity of an object falling under the force of gravity, I can calculate where it will be at any time.”

So far, that sounds like pretty basic stuff, doesn’t it? Not that this author would be able to do that, but we all at least attempted to solve these kinds of problems in high school physics and math classes.

The classical dynamics theory is also the basis for a lot of practical real world applications. It’s used to model the flow of fluids in systems and comes into play when we’re shooting rockets into space, among other things.

And then there’s Einstein’s relativity theory, which includes the well-known formula E = mc2 regarding the mass-energy equivalence. This theory doesn’t quite work with classical dynamics because… Uh, some complex reasons.

“Einstein’s theory of general relativity predicts the existence of time loops or time travel – where an event can be both in the past and future of itself – theoretically turning the study of dynamics on its head,” says Tobar.

He adds that a unified theory that would bring together classical dynamics and the relativity theory would be “the holy grail of physics”.

But it’s not only about mathematics where the idea of time travel gets complicated. We also have to consider… The Paradox!

Basically, a paradox is what happens when you go to change something in the past. However, changing that thing would remove the reason you ever went back in time.

“Say you travelled in time, in an attempt to stop COVID-19’s patient zero from being exposed to the virus,” says Tobar, using the ongoing pandemic as an example.

“However, if you stopped that individual from becoming infected, that would eliminate the motivation for you to go back and stop the pandemic in the first place.”

The possibility of time paradoxes is a logical flaw that some physicists say proves that time travel is impossible. Others say that you might be able to go back to the past, but you’d be unable to do anything that would cause a paradox in the future.

Tobar’s research, however, is now showing that paradox-free time travel is within the realm of at least theoretical possibility.

“The math checks out – and the results are the stuff of science fiction,” Dr. Costa says. He further notes that his calculations could have “fascinating consequences for science”.

According to Tobar, the work he’s carried out shows that events would adjust themselves to be “logically consistent” with any action a time traveler would make, preventing paradoxes from occurring.

“In the coronavirus patient zero example, you might try and stop patient zero from becoming infected, but in doing so you would catch the virus and become patient zero, or someone else would,” Tobar explained.

“No matter what you did, the salient events would just recalibrate around you. This would mean that – no matter your actions – the pandemic would occur, giving your younger self the motivation to go back and stop it.”

In essence, that means time travel with free will is logically possible. At least the numbers Tobar has crunched seem to point in that direction.

But if the events will play out a predetermined way, does that mean we have free will? Or are we just adrift in an amoral, uncaring universe without any chance to affect the outcome of our lives?

Excuse me, it’s time for that existential crisis now.