We here at Oddee have covered our fair share of unlikely events. From long-lost sisters reunited by the coronavirus to a farmer returning a skydiver’s severed leg, we’ve pretty much learned to expect the unexpected.

Or at least you’d think so, but then something else happens against such mindblowing odds that you can’t help but shake your head.

A couple weeks ago, a story surfaced about a bottled messaged that a North Carolina girl threw into the Atlantic in 2019 and found its way to Morocco. The founders contacted the girl, and they are now pen pals through email.

It’s just so ridiculously unlikely for any of this to take place. The bottle traveled over 4,000 miles across the ocean, defying weather, ships, and wildlife, and it actually ended up in human hands.

It’s almost enough to make you want to buy a lottery ticket. 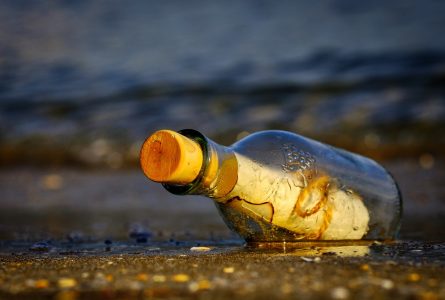 The message’s author is Vivian Byerly, who in April 2019 was a third-grader in Greensboro Day School in North Carolina. Her teacher, Susan Ferguson, had had an idea based on a Pirate Day event she’d witnessed at a private school.

Wanting to teach her students about the Gulf Stream that flows by the North Carolina coast, Ferguson came up with the idea of bottled messages. She had her students write a note on a slip of paper and seal it in a glass bottle.

Another student’s father offered to toss the bottle into the ocean in May while attending an annual fishing tournament on the coast.

Byerly wrote a small message, starting with an encouraging quote: “Be strong because things will get better. It may be stormy now, but it never rains forever.”

She wrote down her name and introduced herself as a third grade student from America. She also included her teacher’s name and email address, together with her school’s contact information.

“If you find this message, please let us know,” she concluded

Byerly bound her note into a little scroll with a length of red ribbon. She sealed in the bottle and returned her assignment to her teacher.

True to his word, the father of one of the class’ students sent the bottle on their way the following month. Soon after, the school received an email that a fishing ship had caught one of the bottles.

Then, things fell quiet. The school year ended, with Byerly and the rest of her class proceeding to fourth grade. Due to the outbreak of COVID-19, Ferguson couldn’t replicate the bottle experiment with her new class.

Finally, on July 26, after more than a year, Ferguson received an email from an unknown sender.

“While we hoped to receive a response, we know the likelihood of it happening is slim. I was shocked to open my email to find an email with photos,” Ferguson told Greensboro News & Record.

One of the photos included in the email depicted Byerly’s bottle, uncorked and with her note sticking out of its mouth. In the other posed a Moroccan fisherman and his nephew.

The bottle had washed ashore near the city of Guelmim in Morocco, which lies on the coast of northwest Africa. The fisherman had been unable to read the note written in English, so he asked his nephew to translate it.

Ferguson has told Byerly and her classmates about the news, and she said they were all quite excited.

Her mother was equally “flabbergasted”. Byerly has since responded to the Moroccan fisherman and received several replies detailing the bottle’s discovery.

A Letter to a Lost Friend

It seems that bottle-based communication across the Atlantic works both ways. Earlier in July, NBC 10 News wrote about a Rhode Island man who also found a message in a bottle.

Todd Ricci, from South Kingstown, was on a walk near Jamestown when he noticed a bottle at the waterline.

“It’s old wavy glass with bubbles in it. It was a message in a bottle. The area I found it in, it’s just rocks. I was amazed when I went down there it wasn’t broken,” Ricci said.

He picked up the curious bottle and brought it home. He wasn’t initially planning on opening it, but opportunity makes the thief, as they say.

“I opened it and read it, and pretty much determined that it’s not from here,” he explained.

After doing some research, Ricci said that all sign pointed to the slightly water-damaged letter originating from England.

“The word ‘canteen’ is used. It opens up with the girl talking about the opening of her mother’s garden, which I found out is over there pretty much like an art show. The word ‘cheery’ is used and she refers to her mom as ‘mum’ all the time,” said Ricci.

The letter is addressed to someone called “Reena”, who appears to be the author’s friend that passed away.

Ricci is still attempting to find a way to get in contact with the person who originally sent the message adrift. While it may have never reached Reena, maybe he could at least provide some closure about where her farewell letter ended up.