We all know what water is supposed to look like. It’s usually depicted as blue, but in reality the color varies based on lighting and other factors.

The same body of water might look anything from blue to green to pitch black. If there’s a lot of sand and mud, it might be a murky brown.

In any case, the point we’re trying to make is, we all have a basic idea of what colors water should be. And we’re ready to bet that a vibrant purple is not on that list.

This is precisely what has left people in Paraguay puzzled after half of a local lagoon suddenly turned purple. By any logic, that just ain’t right.

Cerro Lagoon is located near the city of Limpio, some 10 miles from the Paraguayan capital of Asunción. Some months ago, an embankment was built to connect local factories, effectively splitting the lagoon into two.

Fast forward a bit, and the locals started noticing a nauseatingly foul smell rising from one half of the lagoon. The cause of the smell were the lagoon’s fish that had begun to die in droves. Birds soon followed.

“Three months ago all the fish died in the lagoon, thousands and thousands of them. The smell was unbearable and we were overwhelmed by flies,” local resident Herminia Meza told the Associated Press.

“About a month ago the herons died and the water turned a reddish color.”

That reddish color soon evolved into a bright purple. The curious thing is that the other side of the lagoon is still a healthy blue. 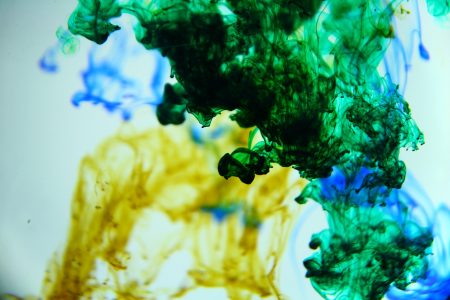 But what could possibly cause such an unnatural change in an otherwise pristine lagoon? Well, we have a prime suspect – there’s a tannery, Waltrading SA, operating on the banks of the lagoon.

Francisco Ferreira, a technician at the National University Multidisciplinary Lab, took samples of the purple water. Coincidentally, he found that heavy metals like chromium were responsible for the color change.

Such chemicals are commonly uses in tanning animal skins to produce leather.

“We will do the analysis of water samples taken and I will pass my report to the Legal Department,” Rosa Morel, an inspector with the Ministry of the Environment and Sustainable Development said.

She added that during an earlier visit, experts had found a pipe spewing untreated waste into the lagoon. They presumed it to originate from the tannery.

Morel said the authorities were demanding the company build a treatment plant to process their waste. Sounds like something that they should’ve done way earlier.

To probably no one’s surprise, Waltrading SA has declined to comment on the case.

Can You Paint with All the Colors of the Water?

While purple is an unusual color for water to turn into, the issue of pollution affecting water’s appearance is a regrettably common one. There are any number of cases from around the world of water taking on fascinating colors due to contaminants.

In 2016, for example, the Pasig River in Manila, the Philippines, became so loaded with pollutants that – to highlight the issue to the public – local artists used pigments made from the discolored water to make paintings.

“At first it was difficult because it was the first time I experienced using dirty pigments, and second was the smell,” JC Vargas, one of the artists participating in the project told Reuters at the time.

“Although the pigments have already been decontaminated, the smell of the sludge was still present, so that was a big challenge for us artists.”

The Yellow River in China gets its name from the nutritious sediments floating in the water. But in 2006, the Yellow River became the “Off-White Cloudy Soup River” for a while.

Suspended matter in the water emitted a “sour” smell and left the stones on the river bank covered in white… Stuff, as well. The local environmental officials conducted an investigation, but didn’t give an explanation to the sudden color change.

But sometimes bodies of water can change colors due to purely natural reasons. For example, a crater lake in Maharashtra, India, took and turned pink over a matter of a few days this past June.

The cause of the color change was a mystery for a while, since human activity around the lake is restricted to tourism. About a month later, Hindustan Times reported that scientist had found that salt-eating bacteria were the cause.

Local experts found that salinity in the lake is particularly high this year, which has given the bacteria optimal conditions in which to flourish. As a result, they’ve dyed the water a particularly vivid color.

NASA’s Earth Observatory noted that our planet’s oceans are actually becoming bluer. Due to rising water temperatures, the amount of green phytoplanktons in the seas is falling, which is resulting in color changes.

That’s actually probably not a good thing. It’s interesting, though.

Meanwhile, in Venice, Italy, the city’s famous canals have done the opposite to the many cases covered here. The waters flowing through the city have become clearer and cleaner than what they’ve been in years.

It’s a silver lining to the coronavirus pandemic that hit Italy particularly hard. As Venetians isolated themselves in their homes, the waters began to run clean again.

However, the mayor’s office was quick to point out that pollution in the canals hasn’t actually – and unfortunately – decreased. The clearer waters are due to lower traffic, which allowed sediments in the water to settle on the bottom of the canals.

But hey, at least it looks nicer.