Seems like TikTok does nothing but spawn stupid and potentially dangerous fads among the kids. There’s been the milk crate challenge and the bathroom-mirror-and-hairspray stunt that caused a teen to set herself on fire, to give just a couple of examples.

We can now add a new ridiculous public nuisance to that list. Apparently, TikTok kids have gotten it into their heads that it’s a great idea to smear baked beans on, well, everything.

The bean stunts have gotten so out of hand that West Yorkshire Police in the UK has had to get involved. The cops are urging stores to keep an eye out for youth buying beans.

“It has come to the attention of the police that a new trend has been started by groups of youths, called ‘beaning,’” said Police Community Support Officer Michelle Owens in a statement. “This involves youths throwing the contents of a can of beans over properties, very similar to the trend of throwing eggs at properties.”

“If you work in a shop, please can you be aware of youths buying large quantities of cans of beans. If you have children living at home, please be mindful if you see them removing cans of beans from the family home,” Owens added. 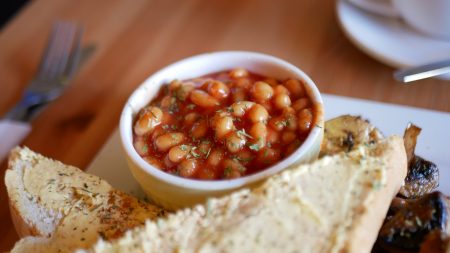 This whole thing is exactly as stupid as it sounds. Beaning, as the kids call it, is nothing but petty vandalism.

It involves the teenie bopper terrors cracking open cans of beans and spreading the contents on whatever they find. Cars, front doors, driveways, and lawns have all fallen victim to these beanheads.

And of course, the stupid stunt has to be recorded for others to see. The vandals then upload the videos onto TikTok under the hashtag #beanbandits.

The beaning trend doesn’t seem to be an isolated phenomenon, either. TikTok data shows that the #beanbandits hashtag has more 1.1 million views.

This Kills the Dog

Needless to say, other people aren’t exactly thrilled about finding their property smeared with beans. After all, they’re the ones who have the clean up the sloppy mess.

At least the stunt shouldn’t (knocking on wood) hurt any people. But it might still turn lethal if the family dog gets to the beans before its owners notice them.

Becky Williams, a veterinary nurse from Nantwich, Cheshire, said the onion and garlic found in most baked beans are toxic to dogs. They could cause vomiting, diarrhea, or even kidney failure in our canine friends.

“[Baked beans] are also high in sugar, which can upset dogs with pre-existing conditions like diabetes. The high fat levels can trigger a pancreatitis flare, especially in dogs that have had it or are prone to it,” Williams said.

“What’s more worrying, is that if the beans are left to go moldy, the mycotoxins released can cause seizures in dogs, and even prove fatal,” she added.

On top of all that, these idiots are wasting perfectly good food. There’s a silver lining to this whole ordeal, though.

In the vein of some less-than-bright bank robbers, these kids are stupid enough to upload proof of their mischief on social media. At least they make it easy for possibly interested cops to find out who they are.

It’s not just the British kids that get roped into moronic things for social media. In the U.S., a whole another trend has already been banned from TikTok.

Known as “devious licks,” this trend has the participants just straight up steal stuff from their schools and classrooms. The kids have pilfered everything from hand sanitizer to clocks, microscopes, fire alarms, the basin of a water fountain, and hundreds of COVID-19 tests.

But… Why? What are these kids going to do with any of that stuff?

We suppose the kids themselves also realized the pointlessness of stealing such items. We’re saying that because the trend soon devolved into just breaking and smashing things in bathrooms and classes.

In this case, though, there’s been some retribution. TikTok itself has banned all associated hashtags and removed videos for violating their community guidelines.

Some schools now restrict students’ bathroom time and require staff supervision to discourage shooting videos in the stalls. In other palaces, there have even been legal repercussions.

In Tennessee, several kids found participating in the trend are facing criminal charges for vandalism. But what did you expect after posting the proof for all to see on the internet?

Maybe we can get the same treatment for the British beanie babies.