Video games can be strange. But sometimes the gadgets used to play them are just as bizarre.

Good controls make or brake a game, and it’s no wonder developers might want to give an unusual game an unusual controller. But sometimes the pursuit of novelty has resulted in some truly mindboggling controllers.

Here are 10 of the weirdest controllers that were actually sold to the gamer crowd.

Fishing games are weirdly popular in Japan, and it’s true that you can’t really emulate the real fishing experience with a game pad or a joystick. Sega got around it by releasing a disembodied fishing reel for its 1997 classic Sega Bass Fishing.

This thing is pretty much a fishing rod without the rod. It had motion detection, a reel, and button placement that resembled how you’d hold your fingers with an actual fishing rod.

The game it came with was later ported for more modern consoles. For some reason, the controller wasn’t.

Steel Battalion is a 2002 military simulation game for the original Xbox. In the game, you control a mech, or a war machine that’s basically a humongous walking tank.

The game strove for realism, and with that game this behemoth of a controller. Officially titles the Mega-Jockey-9000, Steel Battalion’s controller had 44 control inputs, including two joysticks, three pedals, radio dials, a throttle handle, and a dedicated eject button.

This is one of the largest video game controllers ever made, and came with an equally large price tag. Considering that you couldn’t play the game with a regular controller, it   severely limited Steel Battalion’s commercial performance.

The NeGcon was released for the original PlayStation in 1995. It doesn’t initially look all that weird, apart from the strange bulge in the middle.

But that bulge is a hinge that allows you to twist the controller, like you were wringing a wet towel. The motion is supposed to simulate turning a car’s steering wheel for racing games.

The NeGcon was actually pretty well received. Despite its bizarre design, racing gamers found it to be a responsive alternative to an actual steering wheel controller.

Resident Evil is a classic horror game series, and its fourth installment introduced a chainsaw the player could wield. Inspired by the premise, NubyTech released a controller in the shape of a chainsaw.

The appropriately bloodstained chainsaw had all the appropriate joysticks and buttons that a normal GameCube or PlayStation controller had. It also had a speaker playing a fitting rumbling noise.

This thing was clearly more of a collectible than an actual game controller, though. The strain of merely holding this giant hunk of plastic starts straining your fingers really fast.

Talking about niche controllers, how about an actual bowling ball? Made for the popular Wii Sports, the ball was intended to be used only with the game’s bowling minigame.

Regularly, you’d use the Wii’s Wiimote controller to throw your ball. But with this spherical oddity, you can slip the controller inside the ball to emulate the feeling of bowling more closely.

It’s a neat idea, we’ll give it that. But at this point, why not just go bowling with an actual ball?

Since we’re on the topic of weird motion controllers for Nintendo games, how could we not mention the Power Glove? Nintendo designed the controller to be used with Super Glove Ball and Bad Street Brawler, but it was also compatible with most NES games.

Or, well, it was supposed to, anyway. It turned out that the Power Glove wasn’t really compatible with any of them.

The idea was simple — attach motion sensors to your TV, and they’ll control the game according to the glove’s movements. It’s a pity that the late eighties’ motion control technology wasn’t really up to snuff.

Also, the Power Glove was stupidly expensive for the time. Poor functionality and a high price, what could go wrong? 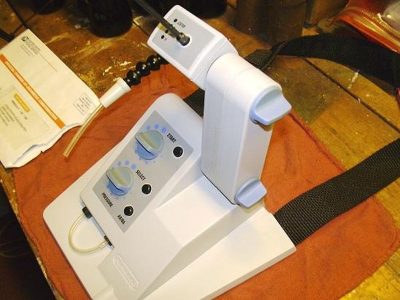 The NES Hands Free Controller is a weird one to be sure. It’s a two-and-a-half-pound hunk of plastic that you strap to your chest and then use your mouth to operate the NES’ eight buttons.

But the controller has good intentions behind it. It was made for gamers who lacked full control of their hands, or didn’t have them in the first place.

And you know what, the controller actually worked decently well. Props to Nintendo for actually making this thing.

It’s a bit of a stretch to even call this thing a controller. It’s a hunk of plastic that just vibrates to the rhythm of Rez’s music.

Yes, we know what the obvious joke here is. But that’s low-hanging fruit, we’re not going to go there.

Functionally, there’s nothing weird about the Intel Wireless Series Gamepad. It’s just… What the heck is that shape?

This must be one of the all-time most bizarre designs for a traditional game pad. First of all, our first instinct would be to hold this strange U-shaped thing upside down.

Some online commenters say that Intel’s game pad is actually surprisingly comfortable, while others slam it as one of the worst controllers ever made. Suppose it depends on how wonky your hands are.

And here it is—the Nintendo R.O.B., or Robotic Operating Buddy. Why use a controller yourself when you could have an intelligent robot control the game for you?

Granted, the idea was ambitious. R.O.B. was supposed to let solitary gamers play two-player games, with the robot taking the place of the second player.

R.O.B. would fix its camera-eyes on the screen. When certain colors flashed, the robot would stack spinning tops or rubber pieces accordingly.

But much like the Power Glove, R.O.B. didn’t work properly even with the whopping two games it supported. In the end, R.O.B. was a useless, slow, unreliable, and expensive piece of plastic and circuitry.