As many parents are all too aware of, kids can be picky eaters. That’s particularly true when they’re younger and are just starting to explore all the culinary wonders of the world.

Most children will get over their difficult food phase and learn to eat new things. Sometimes this process takes longer than usual, and of course there are those people who remain picky all the way to their graves.

But then there’s this kid from the U.K. who takes the cake. Or well, he might if he would eat it, but he won’t.

Ben Simpson is a 15-year-old boy from Swansea, southern Wales. For most of his years, he has subsisted solely on sausages and water.

Three times a day, every day, Ben has eaten nothing but four to five skinless sausages produced by a British food brand Richmond each meal. His mother, Wendy Hughes, estimated that on average she bought roughly $75 worth of sausages each month.

“I get fed up with buying them,” she confessed to New York Post. “It is frustrating.”

Ben’s extreme pickiness began shortly after his mother began weaning him off breastfeeding. Hughes, 55, said that already when he was smaller, Ben would eat nothing but finger food like French fries.

She adds that his aversion to food also had a negative impact on the development of Ben’s social skills. At parties, for example, Hughes said that Ben would refuse to go anywhere near the served food, or simply sit somewhere and cry.

That was even by all logic the boy should’ve been starving.

“If we went to a friend’s house, he just wouldn’t eat anything. He’d say he wasn’t hungry and it was just a nightmare,” said Hughes. 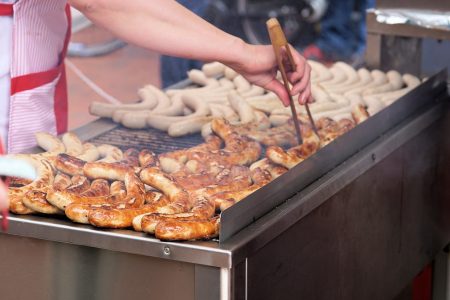 After years of following a strictly sausage-based diet, Ben eventually began to feel the effects of poor nutrition. Although his mother maybe should’ve been happy that Ben didn’t care for candy or soda, he wouldn’t touch vegetables or any other kind of healthier food either.

Hughes said that Ben’s health began visibly deteriorating. He was constantly complaining that he’s tired and his grades at school began to steadily fall.

“Sometimes you just think, ‘Oh God, will you just eat it?’ But then Ben gets upset and teary,” Hughes said, recounting any of the countless times she’d tried getting Ben to expand his culinary horizons.

Eventually, Hughes was at the end of her rope. She’d taken Ben to see every possible nutrition specialist from doctors to quacks, and nothing had helped.

Then, a family friend suggested that Ben might want to try hypnotherapy. That is exactly what it says on the label – an alternative medicinal practice where hypnosis is used to try an alter harmful behavior.

Sound crazy, right? Maybe Hughes thought so too, but then again she was already going crazy trying to feed her child.

What did she have to lose? And so, off to the hypnotist’s office she and Ben went.

Calling David Kilmurry a hypnotist is selling him a bit short, though. His title is cognitive behavioral hypnotherapist, and he is best known for helping victims of domestic violence get over their trauma.

Due to Kilmurry operating out of London, he, Hughes, and Ben initially met over a video call. As soon as Kilmurry saw Ben, it became clear to him that something was indeed not right.

“His phobia was extreme. It was a struggle enough to get him in front of the screen,” Kilmurry said.

However, at the same time, Kilmurry very soon realized what was ailing Ben. His culinary history, alongside with his devotion to the single sausage brand, made it clear to Kilmurry that Ben suffered from avoidant restrictive food intake disorder, or ARFID.

The condition was added to the DSM-V diagnostic manual for mental illnesses in 2013. It causes the sufferer to irrationally fear eating certain foods – or as in the case of Ben, practically all foods.

“I knew straight away he had ARFID and diagnosed him there and then,” he said.

As a treatment solution, Kilmurry suggested using his hypnotherapeutic methods, including things like “subliminal wording” and “neurological seed drop”. If you think that sounds like a bunch of nonsense, we can’t blame you. Hughes did too.

But Kilmurry proved everyone wrong. According to Hughes, after a single two-hour hypnotherapeutic session, combined with a follow-up consultation, Ben was like a different boy.

Earlier, her son would freak out at the mere thought of eating anything but his sausages. After the hypnosis session, he is no longer afraid to taste new things.

“If I give him something, he will pop it straight into his mouth not before he asks me what it is,” the impressed Hughes told Unilad.

Kilmurry said that he was able to “open” Ben’s mind and instill the idea that trying out new foods and flavors was good and something to be excited about.

“He has responded to the hypnosis beautifully,” said Kilmurry. To him, the definitive proof of the success of the therapy was when he received a video of Ben eating fish.

“Him eating fish said to me that he’s cured. Fish for an ARFID sufferer is a no-go. It produces retching and gagging at just the very thought of it,” he explained.

And here we thought hypnosis was pseudo-scientific mumbo. Who’da thunk it?