Exotic foods are a big business around the world. From foie gras to truffles, gourmets from far and wide are prepared to pay exorbitant prices for a new strange thing to stuff into their mouths.

Sometimes, though, these rare treats involve some questionable practices. The aforementioned foie gras, for example, has come under fire because of the force-feeding methods traditionally used in its production.

In Central America, food connoisseurs have a taste for eggs. But not just any eggs – they specifically want to consume the eggs of sea turtles.

In Costa Rica, for example, the eggs are eaten as a rare seasonal treat, with some people even considering them an aphrodisiac, writes ZME Science. They are also in demand in several other countries across the region

Going back to the previous example, in Costa Rica, sea turtle eggs sell for about $1 each. As each turtle nest contains up to 100 eggs, it’s easy to see how greed could overpower someone’s morals.

For a long time, researchers and environmental conservationists have been puzzling how to deter the poachers. Many methods have been tried, and equally many have failed.

But now, biologists from the University of Kent in the U.K. and the environmental group Paso Pacifico may have made a breakthrough. They’ve used fake, GPS-enabled eggs to successfully track the poachers.

And the idea came from a TV show. 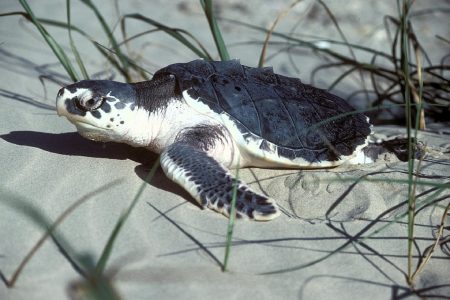 Helen Pheasey, a conservation biologist from the Durrell Institute of Conservation and Ecology at the University of Kent, is the lead author of the recent study detailing the scientists’ efforts. She says that despite the use of beach patrols, turtle egg poaching is still prevalent in Central America.

While pondering about the problem one night, she suddenly came up with the idea of putting tracking devices in the turtle nests. She was supposedly watching TV when the thought hit her, based on what she says.

“This innovation really sort of came from Breaking Bad and from The Wire, where they placed tracking devices on a tank of chemicals in Breaking Bad and a sound recorder in a tennis ball in The Wire,” she told ZME.

Paso Pacifico produced 3D-printed shells, designed to resemble real turtle eggs as closely as possible. Inside the fake egg is a hollow cavity, which houses the embedded GPS tracking device.

“It’s got a GPS and an SMS detector in there, and it will give you a signal, whenever there’s clear skies,” Pheasey explained.

She also admits that Paso Pacifico had already been working on a prototype device before she ever came into the picture. However, it was Pheasey who planted the fake eggs – titled InvestEGGators – into 101 turtle nests across four beaches.

“I was the first person to deploy the decoys and actually test this technology on behalf of Pacifico,” she said.

With the trap set, Pheasey and the people from Pacifico waited for the results. Would the fake eggs fool the poachers, or would they immediately realize they were about to be duped?

As it turns out, the poachers fell for the trick hook, line, and sinker. After the waiting period was over, the criminals had taken about a quarter of the eggs with them.

Pheasey’s crew turned on their GPS devices, and lo and behold, they could see the eggs were on the move.

“We did it,” she summarized. “We proved the concept that you can actually do this.”

While some of the eggs traveled only a mile or two before the signal went silent, other made it much, much farther. The longest-traveling tracker ended up more than 80 miles away.

“I basically watched this egg moving farther and farther inland. And eventually, it stopped,” she said.

Pheasey zoomed in on the map view, and saw that the InvestEGGator had arrived in the back alley loading bay of a supermarket. Basically, it was a place nobody would be at, unless they were up to no good, she said.

The next day, the egg had moved again. This time, it’d made its way to a residential property. Clearly, someone had bought the eggs from the store and taken them home to eat.

Only a Part of the Solution

Pheasey said that no one has been arrested or faced criminal prosecution because of the study. Not yet, at least. According the Pheasey, the value of the study is in understanding the supply chain of illegal turtle eggs.

“We’re pretty familiar with [the poachers], we know who they are. What we’re interested in doing with this technology is actually taking it beyond that, and looking at the bigger crime if you like, which is trafficking the eggs and moving the eggs around the country,” she explained.

“That’s very much what we’re interested in from a law enforcement perspective.”

She also adds that throwing the poachers into jail is not a solution to the problem. Unless the living conditions of the local people improve, others will soon take their place.

“A lot of the work that really will benefit the conservation of sea turtles is education, providing people with opportunities, so they’re not having to resort to taking wildlife resources illegally,” said Pheasey.

“Improving literacy in the area, providing better healthcare, better education, and all of these will serve alongside this law enforcement tool.”

It’s baby steps, but each one takes us forward. Hopefully the turtles will soon be able to hatch their eggs in peace.