Imagine the scenario – a terrifying wild beast is terrorizing the residents of a city. The authorities are powerless against the rampaging monster, and can only resort to blocking parts of the city from the public.

Sounds like a plot to a horror movie, right? For the citizens of Oakland, California, this has unfortunately been everyday reality for several months now.

And the creature behind the terror, the one who has caused the entire city to cower in fear is… A turkey called Gerald.

Seriously, we got pigs stealing laptops, emus being banned from bars, and now this. Has the 2020 madness infected animals too?

Fear, Gerald Be Thy Name

Gerald the Turkey moved into the Morcom Rose Garden at some point early in the year, writes East Bay Times. It’s no wonder he picked the spot, since the eight-acre garden – planted in 1932 – is home to 2,500 rose bushes.

At first, the co-habitation between Gerald and the garden’s visitors was peaceful. Locals said he often mingled among people, going gobble-gobble between the parking lot and the roses.

But then, something changed. Gerald became a different turkey. He started getting aggressive, and eventually began to attack people.

Just picture a 25-pound enraged ball of feathers careening towards you, screeching at the top of its lungs. It’s scary stuff.

He’s not being gentle when bullying people, either. Gerald has injured several visitors, including children and old ladies.

The psychotic Thanksgiving-themed dinosaur reject doesn’t even need a reason to come at you. Victims and witnesses have described Gerald jumping on their backs and clawing and pecking at them without any provocation.

One anonymous victim described the bird as “relentless”.

“My fiance barely warded him off with a stick. People in the park yelled at me to ‘hold my ground.’ He was stalking me, and I swear I was getting flashbacks to the velociraptor scenes in Jurassic Park,” they wrote on Nextdoor.

Naturally, the public responded to Gerald with outrage. They’ve been flooding the mailbox of Oakland’s Animal Control Division with complaints and demands the city do something about the rampaging turkey.

And so, to buy some time to come up with an action plan, the city closed the park in May. Can’t have Gerald attacking anyone if there’s no one to attack, right?

Then, the officials attempted to “retrain” the turkey, whatever that means. Turns out, turkeys aren’t great students and the efforts were fruitless.

At the end of July, Oakland finally got the green light from the state of California to trap and relocate Gerald. Once he’d been caught, he’d be shipped a wilderness area with plenty of his turkey brethren and no people.

Sounds like a turkey paradise, right? Well, Gerald likes his roses and has been avoiding any and all attempts to catch him.

“He’s still there. A Department of Fish and Wildlife officer tried to trap him and couldn’t, so he gave up,” said Ann Dunn, director of Oakland Animal Services.

And so, the park remains closed and Gerald on the loose. He has reportedly calmed down some, but his bloodthirsty reputation isn’t going anywhere, so it is Gerald who must go instead.

The animal control officers have now resorted to running after the turkey and trying to grab him. Hopefully they can do it soon, as the ongoing crisis is starting to draw threats of vigilante justice.

One resident has been making continuous death threats towards Gerald, and even made a few unsuccessful attempts at poultry-cide.

The city is not exactly condemning him. Officials have warned that if the situation continues, Gerald’s relocation orders might turn into a death sentence.

But why did Gerald suddenly go from a peaceful fowl to a foul maniac? There are several theories, none of them conclusive.

Some residents believe that park visitors had been feeding Gerald, and a result he’d lost his fear of people. Having become used to free food, he would then fly into a red hot rage when someone didn’t offer him a meal.

Others, especially those trying to defend Gerald from violent retribution, point out that his wife and kids have also been sighted in Morcom. He could just be over-protective of his family.

A third theory is that Gerald has gotten so pissed at people bringing their dogs to the park that he began attacking any possible dog owners on sight. Dogs are banned from the rose garden, but apparently that hasn’t stopped people from bringing them in.

Finally, some think that the increased activity the park has seen since coronavirus pandemic started is to blame. More and more people have been coming to the park to get a breather in the midst of quarantine.

Gerald may have been overwhelmed by the growing number of strangers. Not knowing how to respond, he then resorted to violence, or so the theory goes. 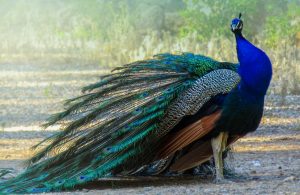 Whatever the reason, Gerald’s reign of terror over the rose garden continues. Here’s hoping the powers that be figure something out before someone takes him home for dinner.

Wait, this just in – in another Oakland neighborhood, a loose peacock is keeping the residents awake with incessant screaming.

For Pete’s sake, Oakland! Can you get your birds in check?!