Bars and pubs are generally places for people to have a good time. It’s where you go to have a few drinks, meet up with your buddies, chat, and enjoy each other’s company.

With that said, sometimes the good times get rowdy and bars have to throw people out for misbehaving. That’s what bouncers are for, after all.

But in Australia, things are usually a bit different, and misbehaving pub patrons are no exception. In fact, a pub in the state of Queensland recently banned two emus for inappropriate behavior.

Yes, you read that right. The Yaraka Hotel in the town of – surprise, surprise – Yaraka made headlines after it posted a notice on its door informing two local emus that they were no longer welcome.

“Emus have been banned from this establishment for bad behavior,” the note read according to The Guardian. It further instructed patrons to let themselves in through the “emu barrier” and reconnect it after themselves.

The barrier is really just a piece of rope running across the hotel’s entrance. It’s not the most high-tech solution, but hey, if it works… 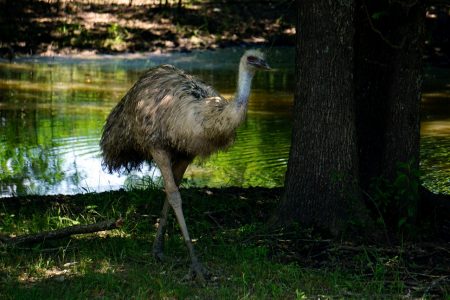 The ban is specifically aimed at Carol and Kevin, a local Yaraka emu couple. They are the spawn of several emu eggs at that hatched in the village at the end of 2018.

Originally there were nine emus in Yaraka and for a brief period they were a small tourist attraction. Unfortunately, seven of them have either wandered off or perished in accidents.

Leanne Byrne, a local who looked after the hatchling emus, said Carol and Kevin have grown a lot in the past two years. The pair is more than 6.5 feet tall, and Byrne expects them to keep growing.

They certainly stand out among the town’s 16 human residents.

It’s too bad then that Carol and Kevin seem unable to behave themselves at the local watering hole. Gerry Gimblett, owner of the Yaraka Hotel, said that she was left no other choice but to banish the birds.

“They’ve been stealing things from the guests, especially their food. They’d stick their heads in and pinch toast out of the toaster,” Gimblett bemoaned to the Guardian.

But the main reason the birds are no longer welcome is their leavings.

“They’re enormous, very large and very smelly, and they created great stains,” said Gimblett. “We love them as part of the Yaraka community, but they’re not welcome inside anymore.”

“They still hang around each gate, hoping that they’ll be able to slip in when someone opens it up, Gimblett’s husband and the hotel’s co-owner Chris concurred. “But so far we are winning the war.”

Byrne, while also fond of the emus, understands Gimblett’s grievances. And really, it’s hard to blame her.

Nobody wants to spend their working hours scrubbing emu poop off the floors. Well, maybe some zoo workers, but that’s beside the point.

Yaraka Hotel’s emu ban would have most likely remained as a local event without a bunch of politicians catching drift of it. That’s right, these birds have friends in high places.

Well, not really. What happened is some politicians from the National Party of Australia stopped at Yaraka Hotel to wet their whistles on their trip through Queensland.

The Minister of Agriculture and the Nationals deputy leader David Littleproud thought the locals were pulling his leg with the ban poster. That is, until he met Kevin. He even posted a selfie of it.

Queensland Senator James McGrath has also met the birds. His Instagram post doesn’t say which one of them approached him, but we will rudely assume that the emus look pretty much identical.

It seems that business is still booming for Yaraka Hotel, even with the troublesome birds around. Gimblett told the Guardian that the caravan park outside the hotel was at full capacity at the end of July.

Emus are one of those things that people outside Australia will probably never fully comprehend. An emu expert told the ABC News that both the birds’ behavior and the hotel’s reaction are understandable.

Emu farmer Stephen Schmidt, form the Try It Emu Farm in Marburg, said the animals will attempt to grab any easily available food, be it on the ground or a pub customer’s plate. 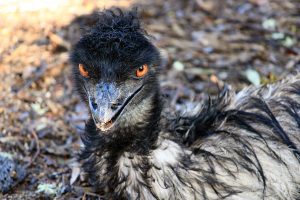 “They’re like a chicken. They’ll eat anything a chicken will eat, basically. Especially in the winter months, because there’s very little protein available,” Schmidt explained.

He warned that people should be wary around emus, even when they appear to be docile.

“Even a very friendly emu can get aggressive, mainly in the breeding season. People have been killed by them. I’ve had them chase me up onto the top of my truck,” he said.

As a testament to the nature of emus, the Australian government actually once went to war against them. The Great Emu War of 1932 is one of those “WTF” moments of world history.

In response to the massive destruction of crops caused by 20,000 emus, the government sent soldiers armed with machine guns to dispose of them. Over a period of nine days, the soldiers opened fire on hordes of emus several times.

In the end, the emus won. Sure, several hundreds of them were killed, but as a whole they shrugged off their losses.

Those are some tough birds, I tell you what.