Giving each other space took on a whole new meaning when the COVID-19 pandemic made social distancing a must for our health and safety. As a result, some singles have been coming up with creative ways to get to know someone, while others have increasingly turned  to online dating sites in the hopes of meeting ‘the one’. Back in March, it was reported that online dating  was up by 82 percent as stay-at-home orders began to roll out. FaceTime and Zoom dating have also become the norm, and some new dating apps have even been created to cater to the new norms of dating during the health crisis. Traditionalists think that romance may be on its way out, as the coronavirus has caused us to find people and keep relationships alive in virtual settings. But it appears that all is not lost, and some people have found ways to meet, date, and even propose to their true love during the pandemic. Find out how these individuals kept love and romance alive during these trying times. 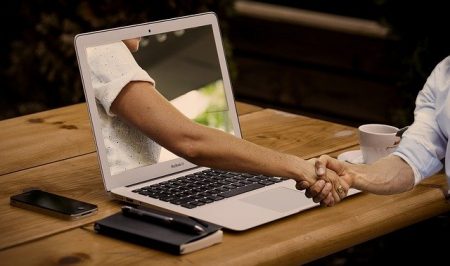 They used a drone and an inflatable bubble

One NYC man was ahead of the game: he used a drone to ask a girl out on a date. In late March, Jeremy Cohen saw his neighbor, Tori Cignarella, while she was having a solo dance party on the rooftop of her apartment. Deciding to take his shot, the Brooklyn native wrote his number on a piece of paper, taped it to a drone, and flew the device to Cignarella. Soon after, the two made plans to go on a virtual dinner date while they were on their adjacent roof tops, and this was followed by a romantic walk around the neighborhood. In order to comply with social distancing rules, Cohen went on the walking date while inside an inflatable bubble, and this move was applauded by their neighbors, and even by the local police. Their dating saga went viral on TikTok and Twitter, and it seems like the two are still seeing each other, as Cohen went on Twitter on August 3 to post a video of them doing handstands.

They got engaged just weeks after matching on a dating site

Before the pandemic, people would plan elaborate proposals that would involve flash mobs, billboards, or a live band. But the pandemic hasn’t stopped people from getting engaged, and some have managed to  pop the question during the health crisis. While most of the couples who have gotten engaged this year have been together for quite some time, one couple stood out among the rest as they met online during the lockdown, then got engaged weeks after their first actual date. Hannah Harvey and Gregg Wright matched on a dating site called Badoo during the start of the lockdown, and the two began communicating with each other exclusively through text messages and video chats. Once lockdown restrictions eased, they decided to meet face to face in June for their first actual date, and after four weeks, Wright proposed while they were on a romantic getaway. Both Harvey and Wright have children from previous relationships, and they will be moving in together – along with all six of their children – after Christmas.

The pandemic may have changed the way we date and get engaged, but people have found ways to defy the health crisis and find love this year. So don’t let COVID-19 rain on your parade – be creative, put yourself out there (but stay safe), and who knows? You may just meet the love of your life during these challenging times.