The ongoing coronavirus pandemic has caused many popular events to change how they host their activities or to straight up cancel them. Among them is the annual Nathan’s Famous Hot Dog Eating Contest.

Hosted each year on the Fourth of July in Coney Island, New York, the Major League Eating (MLE) event has had to buckle. Instead of holding the competition outside, the eaters will gorge themselves indoors in a private space.

The men’s and women’s contests will have only five competitors instead of the usual 15. A slew of other safety measures has also been put in place. There will be no live audience and the staff will wear gloves and masks.

According to the organizer, the event will air on the ESPN at noon on July 4. That means can still watch returning champions Joey Chestnut and Miki Sudo defend their titles.

They are lucky to be competing at all. Some regular contestants will not be able to attend this year due to travel restrictions, MLE said.

The Man with the Iron Stomach

Speaking of MLE champions, Joey Chestnut is among the greatest. The 36-year-old Californian is a 12-time champion of the Nathan’s hot dog contest. He is also ranked as the number one competitive eater in the world by MLE.

He also holds more than a dozen other eating records. Among them are boysenberry pie, buffalo wings, carnitas tacos, gyros, icecream sandwiches and pizza. Just this February he set a new record on Big Mac hamburgers by eating 32 of them in 38 minutes. 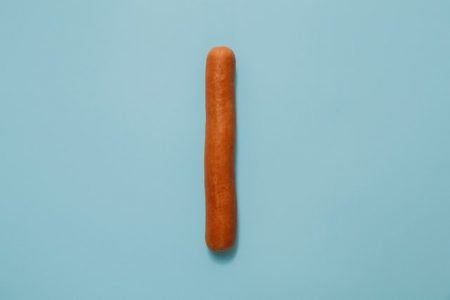 So when it comes to stuffing your face, this guy knows what he’s doing. And like all professionals, he takes his art very seriously.

In an interview with UPI Chestnut talked about the positives and negatives he saw in the new arrangements for the upcoming test of stomachs. To begin with, he thinks going indoors might make the competition a bit easier.

“I won’t be exposed to ridiculous weather. Coney Island has the potential to be really hot and humid on the Fourth of July, so we’re avoiding that, and also there can be rain,” he pondered.

But the indoor setting will also pose a challenge that us regular eaters might not expect – air conditioning.

“Depending on how they prepare the dogs, I feel like they’ll cool down more inside than they do in the sun, so hot dog quality might go down a little bit. There’s a trade-off,” says Chestnut.

According to the champion, cold dogs are not as easy to swallow as hot ones. In a contest of eating speed, that could prove to be a crucial factor.

The biggest drawback of them all, though, is the lack of audience. Chestnut said that he definitely wishes he could have a crowd present.

“There’s been times when it’s ridiculously hot, and I’m feeling faint before the contest even starts. The crowd motivates me and I actually get a personal best – better than I’ve ever done in practice.

“I just have to remember there are going to be millions of people watching on ESPN, and use that as motivation,” he explained.

According to the rules, the hot dog doesn’t actually need to be assembled. The performance is valid as long as the contestant consumes both the dog and the bun.

Chestnut said that he begins every contest by assessing the freshness of the food through touch.

“If the hot dogs are really fresh and the buns aren’t too stale, I’ll think: ‘Oh, wow, my first minute should be about 14 hot dogs. Then the second minute should be 11 or 12.’ I start having goals really, really quick,” he explained.

But there’s always the risk of aiming too high. Chestnut said that going for any more than 14 dogs per minute means that he ends up swallowing bigger pieces.

“Swallowing huge chunks of meat means I’m straining certain muscles in my throat, and those are going to most likely get tired earlier in the contest.”

He also has a bag of tricks he uses during competition. For example, he dips the buns into a cup of water to soften them up, making them easier to swallow.

“After my 10th hot dog, every time, I start dunking into a different cup, so then I can see what cup I’m on,” he said. A true pro keeps track of his pace, after all.

This method also helps Chestnut gauge how much water he’s ingesting. If the cup is nearly empty after ten dogs, he’s filling himself up with liquid instead of hot dogs. If it’s too full, he knows he’s working too hard to swallow the buns.

“I have to keep that perfect balance of enough water to get the food down quickly and efficiently, without so much water that it takes up my capacity.”

Like all athletes, Chestnut has trained hard. Over his 15-year career in competitive eating, he has constantly strengthened his throat muscles.

Keeping a journal of his exercises, Chestnut said some of them have been more successful than others.

“When I was younger, I would do crazy things to push my body to new limits. I feel like if I knew my body as well as I do now when I was 25, I’d probably be doing a ridiculous number now,” he reflected.

“But right now, I think I can still put up a new record just by knowing my body, and knowing how to push it.”