Here’s a big fish story to top anything your grandpa has told you: my catch was so dangerous that the army had to get involved.

Yeah, right. What could you possibly fish up that warranted military intervention?

Try a hand grenade. That is exactly what two schoolboys in southern Finland managed to pull up on July 2.

Schoolyard chums Lari Tammivuori and Viljami Juutilainen, both 11, were magnet fishing by the lake Vesijärvi in the city of Lahti. Vesijärvi translates to “Water Lake”, as opposed to all the other kinds of lakes out there.

Despite the word ‘fishing’, magnet fishing doesn’t aim to catch fish but scrap metal and other objects with a strong magnet attached to a rope or a string.

“We have this kind of a magnetic fishing rod that we use to bring up scrap metal. Usually we catch stuff like bottle caps and nails,” Juutilainen told the Finnish public broadcasting company YLE.

This time, though, the boys caught more than they had bargained for. When they pulled the magnet up, they noticed that it had stuck to a fairly big, rusted and mud-covered lump.

“I didn’t immediately know it was a grenade,” said Juutilainen. “We picked it up with our hands and brought it to the shore. Once we realized what it was, we didn’t touch it again.” 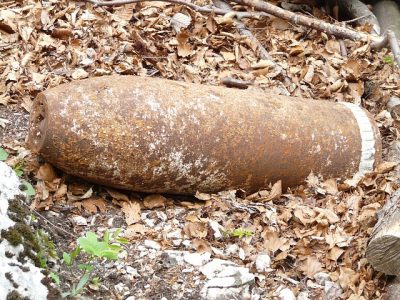 Being the responsible young men that they are, the boys immediately called Juutilainen’s mother Maarit. She was skeptical, thinking that the whole thing was just the children’s imagination running wild, but she decided to go see what the hubbub was about anyway.

She became a lot less dismissive once she saw the object with her own eyes.

“It looked very old and was rusted through, but I thought it might actually be a grenade,” Maarit Juutilainen said. “Viljami’s aunt is a police, so I sent her a couple of photos of it.”

Confirmation of the potential danger came quickly. “She sent clear instructions to stay well away from the grenade and wait for the police,” said Juutilainen.

The police arrived at the scene around 1 pm. They soon confirmed that the object was indeed a hand grenade and cordoned off the area “between the Lahti harbor and a small dirt road by lake Pikku Vesijärvi”, according to a police tweet.

Then, the police contacted the Finnish Defense Forces for aid in disposing of the grenade. A group of high explosives experts arrived at the scene and began considering how to defuse and remove the device.

Two hours later, the police announced that the boys’ catch had been removed and the area was again open to the public. They thanked the FDF for their assistance and wished the two young fishermen better luck in the future.

According to pioneer officer Pasi Suvitie from the Finnish Army’s Armored Brigade, the grenade was taken away in a special explosives transportation trailer and will be later detonated in a controlled environment.

Mrs. Juutilainen said she is slightly concerned but doesn’t plan to stop the kids from continuing their hobby in the future.

“I’m a little terrified of what else they might find. But I think we’ll let the boys keep fishing up junk from the lake,” she chuckled.

There’s More of These Things?

According to Suvitie, several similar explosives are found in Finnish waterways each year, but usually not this close to the shore.

Although the army has not commented on whether the grenade was live or a dud, Suvitie said that it could have a caused “a dangerous situation”. That’s Finnish authority lingo for “it could’ve blown up”.

The officer further estimated that the grenade dates back to the 1940s. In other words, it was most likely a World War 2-era relic.

Finding old military equipment and unexploded ordnance is not that uncommon in Finland. During WW2 the country had two conflicts with Soviet Russia and another one with Nazi Germany, and remains of equipment from all three armies can be found particularly in the old battlefields along Finland’s eastern border and in the northern region of Lapland.

After the war, some circles in the Finnish military also began a secret project known as the Weapons Cache Case to stockpile military arms in case of potential Soviet occupation. As the operation was illegal, no official records of the caches were kept and some of them have remained hidden – and thus discoverable by civilians – to this day.

In certain parts of Finland old ordnance is discovered on a weekly basis.

For example, in 2014 a young child in the city of Hämeenlinna found a still active explosive round from a WW2-era anti-aircraft cannon. An investigation by the army revealed that the round’s timing mechanism was jammed but still functional and that it could have exploded at any moment.

In 2013, a Soviet incendiary bomb – probably a war memento picked up by a less-than-careful one-time resident – was discovered in the attic of an apartment block in Lappeenranta.