Quick, name a food associated with Germany. There’s a pretty good chance you came up with either beer or sausage. It’s a bit of a tired stereotype at this point, but there’s no denying facts: Germans love their beer and sausages.

But what are Germans to do when they leave the beer hall late at night and a craving for a snack hits them? It must’ve been a common problem, as the ever-so-practical Germans have come up with an answer.

According to the German Press Agency, the machines are particularly popular outside cities. Butcher shops in less developed areas close earlier, but the German stomach doesn’t always abide by business hours. Vending machines are just a response to demand.

“Especially in structurally weak, rural areas, vending machine solutions are becoming increasingly popular,” industry spokesman Heike Richter told The Independent. “There is a strong development towards the vending machine, which is used to deliver meat, milk, eggs and other products to customers outside of core opening times.”

The most popular kinds of sausages – such as bratwurst and bockwurst – are common fare in the vending machines, but that’s not all. Some of them also sell barbequed meats, steak, potato salad, vegetables, milk…

Basically, they vend anything you’d expect to find at a German butcher’s shop. You could get a whole dinner out of these things.

There are currently more than 570,000 sausage vending machines in Germany. Their growing popularity has also seen them pop up in neighboring countries, like France.

But fans of traditional German brick-and-mortar shops don’t need to worry. According to trade authorities, the machines are an extension – not a replacement – of a normal shop. 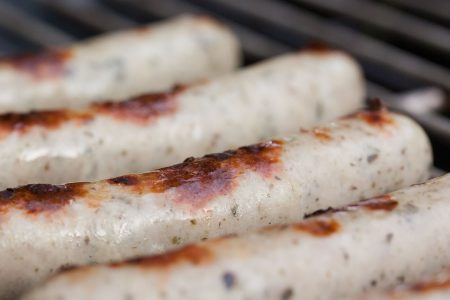 But How’s The Sausage?

So you can buy your sausage, steak and veggies from a vending machine. The fact just begs a follow-up question – would you want to?

Vended food doesn’t exactly have the reputation of gourmet fare. Even if it is convenient, there’s no point in buying the vacuum-packed sausages if they don’t taste good, right?

Well, there’s always a thing to be said for the quality of German manufacturing. The popularity of the machines sort of speaks for itself, too. However, we do have a first-person account of German vending machine food.

Martin Egnash of Stars and Stripes decided to give the machines a go. In his story he details the experience of trying a variety of things from a vending machine in the town of Mantel, southwestern Germany.

Egnash said the machine contained what you’d usually expect from a German butcher. There were some more unusual foods too, like a jar of rouladen. That is, a thin slice of beef wrapped around bacon, onion, and mustard. Yummy!

Egnash decided to go for a more conservative option. “I decided to try the bergbratwurst, which turned out to be delicious,” he wrote.

“For reasons I’m still not sure about, I also tried the leberwurst. This is a liver sausage in a can that looks suspiciously like cat food. The liver spread actually tasted really good on top of some bread with a couple of pickles on top.”

All in all, the food got a passing grade.

“I think everything I tried was pretty good. Not great. But certainly better than I expected. I would try it again sometime if I wanted to grab a steak and the butcher was closed,” Egnash summarized.

For stuff that usually costs between $3 to $6, that’s not bad at all.

Been A Long Time Coming

German butcher Steffen Schütze detailed his innovative idea of attaching a vending machine to his shop to The Local.de already back in 2012. According to him, the spark for it came from a botched late-night barbeque he’d decided to have with some friends.

With all the stores closed, they had to rely on sausages from 24/7 gas stations. As a professional butcher, Schütze wasn’t exactly impressed by the quality of the meat.

You could ask why he didn’t get sausages from his own shop, but let’s not go there.

In any case, soon afterwards a brand new vending machine stood next to this shop. The customers loved it, a promising omen of things to come for the German sausage vending business.

“On one top-performing day we had about 300 products that went. I am excited to see how it’s going to be when we finally get barbecue weather,” Schütze said at the time. We can only assume it went well.

Addressing concerns about his sausages keeping fresh, Schütze said he kept a “careful watch” on them. He replaced the products with new ones every evening and said the machine was fully temperature regulated.

Additionally, the machine carefully produced the meat to the customer, instead of just dropping it like a regular vending machine.

This video of excited German guys getting double the sausage proves that even such advanced technology can fail, though. But they certainly don’t seem to mind.

Leave it up to the Germans to put sausages and engineering together.