Although the list of COVID symptoms keeps growing, as of now, long-lasting erections are not on it. But for this 62-year-old man, he not only experienced an erection, but a four hour one.

Even Viagra commercials tell us that erections lasting longer than 4 hours are bad. At first it may be “an exciting” side effect (if you have the strength to act on it that is,) but not after four hours.

Continuous blood flow is important to the penis, and with a prolonged erection, there is a chance of tissue damage. A team from the Centre Hospitalier de Versailles in Le Chesnay, France,  near Paris, wrote up the case report about the man.

The man visited his doctor initially with complaints of fever, dry cough, diarrhea, and because he was feeling yucky. He was otherwise healthy.

The man was prescribed antibiotics but two days later began having shortness of breath, went into respiratory failure, and was admitted to the hospital. He was put onto a ventilator for is breathing but was also was having blood pressure issues.

The man received intravenous fluids and medications to even out his blood pressure. But back to the erection.

The case report said, “This basically meant that no one had noticed an erection before the physical exam. Of course, when someone is having difficulty breathing, that person’s penis may not be the first thing that you look at, unless he is doing something very unusual to make it difficult to breathe. So it is not clear how long the erection may have been going on before the physical exam.” 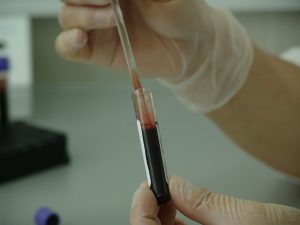 When the erection didn’t fade, even with an ice pack on his penis, doctors drew blood from the organ for testing. I bet this guy was thankful he was sedated for all of this.

Doctors injected a medication, ethylephrine, and put the man on blood thinners. He didn’t have any type of history with blood clots but it’s coming out that more and more COVID-19 patients have been experiencing blood clots.

Stay safe and healthy out there, people!