We’ve told you plenty of times that wild animals can be dangerous. Especially bears. But if you’re still unconvinced, here’s another cautionary tale.

A man in Alaska dealt for days with a bear scenario reminiscent of the Leonardo DiCaprio movie The Revenant. Night after night, the grizzly would return to torment the man staying alone in the woods.

This wasn’t a playful bear, either. There were clear signs that the beast had attacked the man several times, and prevented him from sleeping for several nights.

Armed only with a handgun and a small stash of ammunition, he was somehow able to keep the bear at bay enough to survive. But as the days went on, his situation became increasingly dire.

Finally, a Coast Guard helicopter happened to fly by on July 16. The man was able to catch their attention and his ordeal came to an end.

The lone woodsman got off fairly easy, in the end. The helicopter took him to a hospital, where doctors treated his several bruises and a not life-threatening leg injury.

At least he didn’t end his days in the belly of a bear. 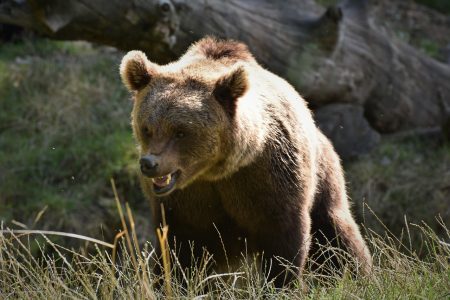 According to the chopper crew that rescued him, the man had been staying at a remote mining camp. Some 40 miles away from the city of Alaska, the site had a small tin-roofed shack, an outhouse, and not much else.

Located at a river drainage area, the camp is about as far in the middle of nowhere as you can get. The man, in his late 50s or early 60s, wouldn’t say how or why he arrived there.

The officials also don’t know how long the man had been staying at the shack. His friends had reported that he hadn’t returned to Nome, so he was possibly simply out on a wilderness trip.

The only thing that’s certain is that he’d been there at the camp least a week. We know that because that’s how long he’d been suffering at the hands of the bear.

One day, the animal had appeared out of the woods and attacked him. The man managed to drive the bear off, but it returned the following night.

This pattern repeated over and over again over the following nights.

“He had a pistol. He said that the bear kept coming back every night and he hadn’t slept in a few days,” said Lt. Cmdr. Jared Carbajal, one of the pilots of the helicopter that rescued the man.

It’s apparent that each night, the attacks were getting more vicious. The shack’s door had been ripped off its hinges. Carbajal also said there were signs that the bear had at one point dragged the man down to the nearby river.

Saved by the Bell

Due to his leg injury, which he had taped over, the man was unable to leave the area. With no phone, all he could do during the days was prepare for the next night’s attack and hope for rescue.

He had managed to climb onto the roof of the shack. There, he scrawled the messages “SOS” and “HELP ME” in large letters.

Lucky for him, his prayers for rescue were answered. A Coast Guard helicopter, on its way from Kotzebue to Nome, had slightly changed its course to avoid clouds.

That’s when Lt. j.g. A.J. Hammac saw the man stumble out of his shack.

When Hammac responded that the man was waving with both hands, alarm bells went off in Carbajal’s head. Just to be safe, the Commander decided to bring the helicopter down by the shack.

“We don’t really come across people in the middle of nowhere. He was kind of struggling,” recalled Hammac.

“When we came around, he was on his hands and knees waving a white flag. He definitely looked like he had been out there for a while,” he added.

The rescuers timing couldn’t have been more perfect. The man only had two rounds of ammunition left when they reached him.

Carbajal and Hammac treated the man for immediate injuries and got him on to the helicopter. Whether the bear was shaking its fist at them from the bushes as the chopper took off, we don’t know.

A Warning to All

It’s not unusual for bears to attack people in Alaska, since during summers the area teems with irritable grizzlies. Between 2000 and 2017, 68 people were injured in 66 bear attacks in Alaska, with 10 fatalities.

What is unusual, according to Petty Officer First Class Ali Blackburn from Alaska Coast Guard, is for a person to be repeatedly attacked by the same bear. Usually, the bears will leave you alone if you manage to drive them off.

But as it often is with wild animals, they can be unpredictable. Blackburn said this case serves as a perfect example of how important it is to carry an emergency beacon or a satellite phone when out in the wilds.