Puppies, kittens, bunnies… There are just so many cute animals in the world and not enough time to pet them all.

But your usual huggable fuzzballs are merely the tip of the adorable iceberg. We’ve written a lot about the most horrible animals, but this time, we’ll take a look at the forgotten and unknown cuties of the animal kingdom.

Here are eight of the cutest animals you may have never heard about. But as squeezable as they look, remember — these are still wild beasts.

The Ili Pika (even the name sounds adorable) is a small mammal living in the mountains of northwestern China. It’s related to the rabbit and it shows — it’s like a fuzzier bunny with round ears.

The Ili Pika is a species in the same family that also includes the regular pika. They’re both just as adorable, but we featured the Ili variety because it’s so rare.

Unfortunately, the Ili Pika is getting rarer by the minute. These adorable critters are endangered, and researchers estimate there may be fewer than 1,000 of them left.

The greater bilby comes from Australia, so it’s no wonder that it looks a bit weird. But it’s that long snout, bunny-like ears, and the long tail that make it really cute at the same time.

The bilby is a marsupial related to bandicoots. It dwells in northwestern Australia, eating whatever it can find from fruits to bugs and small animals.

As a fun fact, greater bilbies don’t drink water. They get all the moisture they need from their food.

If you saw a picture of a sand cat, you’d probably think it’s just somebody’s kitten. But this is indeed a wild animal.

Sand cats live in the deserts of Africa, the Middle East, and Central Asia. They can grow to be 20 inches long (without their long tails) but their proportions and fuzziness make them look like kittens even as adults.

Like bilbies, sand cats rarely drink water. The Toubou people of the Saharan desert say that they like to sneak into their camps at night to sample fresh camel milk, though.

If there ever was a creature that deserves the title “furball,” it’s the Siberian flying squirrel. Just look at it!

And the good news is that if you’d like to see one of these critters in the wild, you don’t even have to travel to Siberia. Despite their name, the squirrels have in recent years established small populations in Estonia, Finland, and Latvia.

One of the best places to see them is in fact the Nuuksio National Park in Finland. The squirrel is even on the park’s emblem due to its prevalence in the area.

Now, we talked about the jerboa before in our list of the most useless animals. Although these gangly creatures are pretty helpless, they are also pretty darn cute.

Jerboas live in desert regions from Africa to Asia, sharing some areas with the sand cat. They look pretty much like miniature kangaroos, but with much bigger ears and longer tails.

But Jerboas are actually a family of animals, with multiple different species. They’re all equally adorable, though.

Take a closer look at that snout!

Elephant shrews look like mice, but they’re not actually rodents. They get their names — unsurprisingly — from their cute, long snouts.

Various species of elephant shrews, with noses of varying lengths, inhabit the sandy and rocky regions of Africa’s southern half. They’re some of the fastest small mammals, able to reach speeds upwards of 17 miles per hour. They also have fairly large brains — for small mouse-sized creatures.

The pink fairy armadillo wins the award for the animal with the cutest name — no competition. But this world’s smallest armadillo doesn’t just have a cute name.

It kind of looks like a gopher decided to grow its own suit of armor. These four-inch-long cuties live in the central plains of Argentina, spending their days underground and emerging to snack on insects at night.

We’re not sure how the fairy armadillos ended up with their pink shells, but we’re glad they did. Also, compared to other coarse-haired armadillos, they’re downright fuzzy. 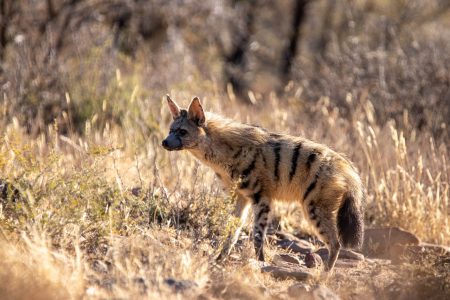 Finally, we have the aardwolf, hailing from eastern and southern Africa. Despite its name and looks, the aardwolf actually belongs to the same family as hyenas.

Luckily, there’s not much family resemblance between the aardwolf and their mangey cousins. The aardwolf is a bit gangly and weird, but it’s also really cute — and it eats insects instead of carrion.

Just look at that small face and big ears! Doesn’t it make you want to pet it and call it a good boy?