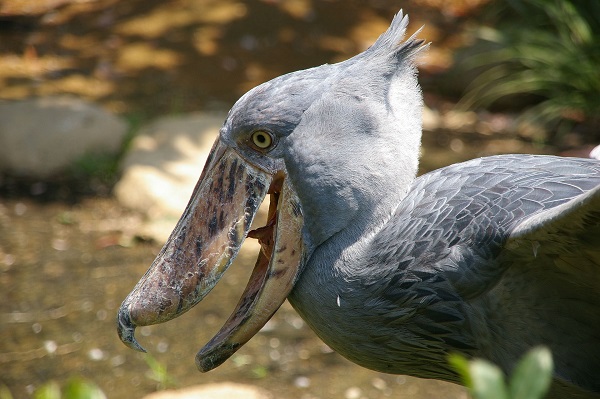 You stand before the bird as it towers over you. Alert, intelligent eyes watch your never subtle move. As the bird raises up to its full height, an impressive 5 feet, it cranes its neck back and stretches its head high for even more length. Its throat bellows a low, repeated thud-thud-thud-thud, a combination of vocal sounds and thumping of its sharp beak as a show of dominance. It lowers its head and looks you in the eye once more. The message is clear. Back up. Or else.

Shoebill Storks are like something out of Jurassic Park.

While once called storks, they’re actually classified as pelicans. Living primarily in African swamp lands, Shoebills exist of a diet of mostly fish and small wildlife, deposing of water and vegetation captured along with prey through the sides of its bill. Their wingspan can reach over 8 feet. Its beak ends in a sharp point that can decapitate prey with a snap.

Shoebills have blue-grey plumage, huge, shoe-like bills and long, thin legs. But the truly strange thing about these birds is the noise they make, and how those intelligent eyes and eerie clunk of its bill can send shivers down your spine, harkening back to raptor calls from the Jurassic Park movies.

With population estimates anywhere from 5,000 to 8,000 in swamps in Sudan, Uganda, eastern Democratic Republic of the Congo, and Zambia, as well as alagarasi wetlands in Tanzania,

The main threats to the impressive bird are habitat destruction, disturbance, and hunting. The Shoebill’s height matches the Jiraba, that some list as the 10th tallest bird species.

Videos of the Shoebill show off its intelligence and eerie call. It’s hard to look at the bird in action and not be in awe. Beautiful, dangerous, and definitely odd.