You can’t make fun of a person for their name – they didn’t have any input on whatever awkward combination of words their parents decided to give them. But we’re going to say that places are fair game.

We’ve done this before with street names, and we’ve even looked at towns before. But the last time, we accepted town names from foreign countries. That’s just a cop-out – of course names in other languages might sound strange.

This time, we’re going to do it right and focus entirely on the good old U.S. of A. Here are the 12 strangest town names in the U.S. that we haven’t covered before. 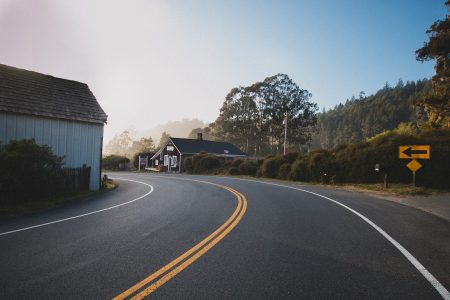 This tiny Alabama community sounds delicious, at least if we assume that the bacon level is sufficient. But according to local tradition, the town’s name stems from the 1800s.

The story goes that outlaws were active in the area where the terrain levels out. That’s where the crooks got their bacon by robbing traveling pioneers – hence, Bacon Level.

When you reach Nowhere, Oklahoma, the residents will tell you that you’ve arrived nowhere. And in a way that’s true – this unincorporated community isn’t even on the map.

Yeah, this is in the same category as Nothing, AZ.

Boring, Oregon, markets itself as the most exciting place to live. The unincorporated community actually takes its name from William Harrison Boring, who arrived in the area in 1874.

Boring is also the sister city of Dull, Scotland, and Bland, Australia. What a dynamic trio.

Ding Dong is an unincorporated community pretty much in the middle of Texas. You know, we’re starting to see a theme with the kinds of towns we’re covering here.

Ding Dong got its name from the uncle-nephew duo of Zulius and Bert Bell, who opened a country store in the area in the early 1930s. In addition to symbols of bells, their store sign contained the words “Ding Dong,” and the growing community decided to take that as its name.

Oh hey, lookie here. A town that’s not an unincorporated community. Accident got its name in the 1700s, when two different land surveyors claimed the area for themselves “by accident.”

They started calling the plot of land Accident Tract and the name stuck. Fun fact, you can call a person from Accident an “Accidental.”

Truth or Consequences (or Truth-or-Consequences, depending on who you ask) is a reasonably sized city in New Mexico. We say that because with around 6,500 residents, it’s practically a metropolis compared to these other places.

With a name like this, you’d imagine there’s some kind of a dramatic story behind the town. But nope – it was renamed from Hot Springs in 1950 when the Ralph Edwards, the host of the Truth or Consequences radio show said he’d air his 10th anniversary broadcast from the first town that changed its name to match his show.

We really expected something more.

According to a legend, Booger Hole, West Virginia, got its name from a spate of murders in 1917. The townsfolk formed a mob to find the “boogeyman” – or “booger” – behind the killings, and the name came from there.

It’s a good story, but it can’t be true since newspapers from the time already called the community Booger Hole prior to the murders. We’re just going to assume someone at some point had a nasty habit of picking their nose at this place.

Unlike Booger Hole, we know where the name of Boogertown, North Carolina, came from. Moonshiners in the days of yore used keep curious visitors away from their stills by telling tall tales about a “boogerman” that haunted the local woods.

So maybe there’s some truth to Booger Hole’s story from the previous entry. Or maybe both places just liked their illicit liquor.

There are two Slapouts in the U.S., one in Oklahoma and another in Alabama. So what happened? Did both places have some folks go on a slapping spree?

Interestingly enough, both towns have identical stories behind the name. Both were supposedly home to a general store that was always out of stock – or “slap out” of anything to sell.

The town of Okay in Oklahoma has had many names over the years. It was founded as Coretta, then it became Falls City, then Rex, and finally North Muskogee.

But everything changed in 1919, when the Oklahoma Auto Manufacturing Company built the O.K. Trucks factory in the area. Henceworth, the town was known as Okay, OK.

And they haven’t changed their name since.

Pig is an unincorporated community along a road in Kentucky. The town’s biggest claim to fame is probably the extremely uninspired origin of its name.

When pioneers arrived in the area, they couldn’t decide what they would call the settlement. Then, a resident saw a pig on the road and went: “Why don’t we call the place ‘Pig?’”

Sure enough, that’s what they did.

Burns Down is a place in South Carolina, today incorporated into the town on Sumter. You can still find the name on the map, and that’s about it.

We couldn’t find anything about where the name came from. But let’s hope it’s not an eerie premonition for the future.