We can probably all agree that a functional justice should be based on proportional punishment. For the most part, things luckily work more or less as they should.

Sometimes, though, the scales of justice tip the wrong way. We can all probably recall at least a couple of cases where someone who committed a serious crime got away with a slap on the wrist.

What doesn’t get talked about that often, though, is when things swing in the opposite direction. That’s what happened to Rolf Kaestel from Arkansas.

Kaestel made it off with $264. He didn’t get to enjoy the money for long, though – he was soon caught and tried.

Now, what would you consider an appropriate punishment for stealing a couple a hundred bucks with a toy gun? Whatever you thought of, you probably didn’t think he should spend the rest of his life in jail, did you? 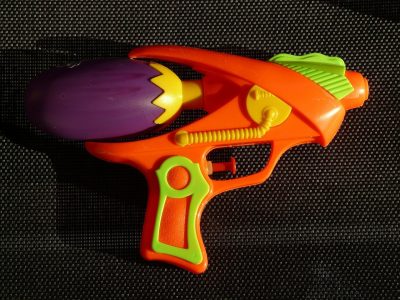 Now, make no mistake, Kaestel committed a crime for which he had to be punished. But it’s hard to comprehend the logic the court and jury used when coming up with the life sentence.

Kaestel really didn’t steal a large amount of money. Additionally, no one was hurt, and he didn’t violate any firearm laws – unless they suddenly apply to toys.

The robber himself doesn’t understand the reasons, either. He doesn’t try to claim that he didn’t deserve to penalty, but simple because of the disproportionate prison sentence.

“I have not been able to make any sense of it. Not because it’s me or my case, but because this kind of thing should not happen anywhere to anyone,” Kaestel said.

“I was guilty. I simply hoped and believed that jurors would do real justice. And I thought that a sentence of 10 years, or even 20 or 25 years, would have been more than sufficient.”

Well, those are the words of the criminal, but what about his victim? How does Schlutterman feel about Kaestel sitting behind the bars for 40 years?

Not very good, apparently. According to Schlutterman, Kaestel didn’t use violence and was about as civil as a robber can be.

“I couldn’t believe that he was still [in jail],” Schlutterman said in 2014 – seven years ago.

Schlutterman, 59, even appealed to the then-Arkansas Governor Mike Bebe to grant Kaestel clemency, to no avail. Even the current Governor Asa Hutchinson denied Kaestel’s previous clemency request in 2015.

When even the victim of your crime comes to your defense, something has gone seriously wrong. But Schlutterman isn’t the only voice speaking for Kaestel.

Van Jones, the founding member of Reform Alliance – an organization that seeks to rewrite probation and parole programs – said Kaestel has paid his dues.

“A man’s life is worth a lot more than $264. Obviously Rolf made a bad decision but society made a worse decision in throwing his entire life away over that one day,” Jones said.

“I don’t think anybody would think he hasn’t more than repaid his debt to society after decades behind bars for an offense that didn’t cost anyone their lives.”

While in prison, Kaestel hasn’t sat idle. He’s earned several associate’s degrees, worked as a paralegal, and has given astronomy classes.

Now, he hopes he may soon be able to continue his paralegal work as a free citizen. Governor Hutchinson commuted Kaestel’s sentence on July 1.

“The applicants intended for pardons have completed all jail time, fulfilled all parole and probationary requirements, and paid all fines related to their sentences,” Hutchinson said in a prepared statement.

He’s not quite out of the prison yet, though. Hutchinson’s clemency grant has triggered a 30-day public feedback period on Kaestel’s case.

“On August 4, our next clemency release date, if there are no negative developments, the proclamation of Kaestel’s commutation will be issued,” said Shealyn Sowers, Hutchinson’s director of communications.

“That is the date that the sentence is commuted to a term of years, and he then becomes eligible for parole.”

Kaestel himself hasn’t said whether he thinks he’ll actually get out of jail. But he does think he’s served his time.

“Forty years and counting has certainly been a heavy price, wouldn’t you say?” he pondered.

“I sometimes wonder how it would have turned out had things been different, but that’s actually silly to do.”