There are a lot of famous streets in the U.S., from the Las Vegas Strip to Wall Street. But what about the smaller, less illustrious roads? Don’t they deserve some recognition too?

You’re dang right they do, and that’s what we here for. We’ll take you on a road trip along the streets with the weirdest names in all of U.S. 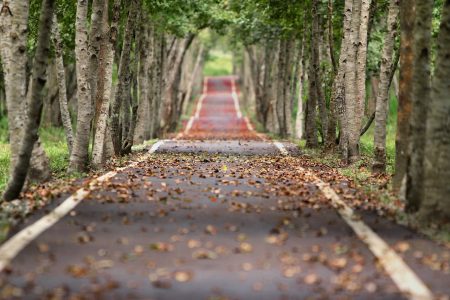 We’re off to a bit of a lame start here. This Ain’t It Road, on the shores of Lake Martin in Dadeville, Alabama, has a weird name and that’s about it.

Seriously, there’s a couple of houses and that’s it. We couldn’t even get a Google Street View from there, for Pete’s sake.

If there’s a street name to crash property values, here it is. Then again, we doubt there’s much property on this private lane in Traverse City, Michigan.

Seriously, it’s so insignificant that we couldn’t even find it on the map. It did win TheCarConnection.com’s award for the silliest street name in the U.S. in 2006, though.

No wonder these roads have such weird names – they’re so tiny, that no map bothers to list them. It’s the same case here.

Still, Heather Highlands in Pennsylvania looks like a decent enough community. Hopefully this street name isn’t any indication on the fate of any couples that decide to settle there.

“What? That’s not a funny name! Are you making fun of Hawaiian languages?!” you say. We hear you, but let us explain ourselves.

The name of this road on Oahu translates to “whale genitals.” Who’s laughing now? Hopefully you.

We take back what we said about Psycho Path. This one’s the road you definitely don’t want to live on.

Shades of Death Road in New Jersey supposedly passes by an old haunted lake. Yeah, just drive on by.

It sounds like this road was named after someone’s cat fell asleep on the keyboard. But the name actually comes from the Zyzzyx genus of sand wasps.

They still did manage to misspell the name, though. If you want to go see what the road’s like, you can find it in Zzyzx, California. Really, they got it wrong twice?

We can only imagine that this road got its name after someone didn’t go before the trip. The name’s accurate, too – this little lane is pretty much smackdab in the middle of nowhere.

There’s actually a pretty good story behind this one. A man called Paul Scandariato originally wanted to name his private road Sesame Street, but the name was already both copyrighted and used for another road in his county.

After several more unsuccessful naming attempts, Scandariato submitted an application for “Awesome Street.” The name was available and it stuck. Awesome.

If there are no toilets on Farfrompoopen Road, then the situation must be the same here. Let’s get on Street View and see how many poops we can find to kick on this Fort Worth, Texas, street.

Huh, it actually looks like a really nice neighborhood, to be honest. We kind of want to live here now.

Oh, and based on the other roads with Native American names around, we assume this road is named after the Kickapoo tribe. Man, now we just feel like jackasses.

There are actually a whole bunch of No Name Lanes. There’s one in California and three in Colorado.

Three streets in one state, all named No Name Lane. Lack of imagination or just pure laziness? You decide.

This doesn’t quite beat Shades of Death Road, but it’s a good runner-up for the most gruesome street name. It got its name from the Buckets of Blood Saloon that once stood by the road.

The saloon was originally called Terrill’s Cottage, but a shootout in 1886 got so violent that “buckets of blood” ran on the saloon’s floor. After the event went viral (or as viral as you can get in the 19th century), the saloon’s owner changed the name to capitalize on the infamy.

A smart, if a bit tasteless, business move. The saloon’s long gone, but the street still remembers its gory past.

We tried to look up the story behind this name but couldn’t find anything. It’s probably not from the road condition, though – the pavement’s not great, but at least we don’t see any potholes.

We’ll put this one in the mystery pile. There’s a Dunkin’ Donuts just down the street from here if the name got you craving some donut holes, though.

Here’s a double whammy for you. There’s actually an explanation for the weird names – in the Muscogee language, the names mean “eagle” and “bear,” respectively.

So yeah, the names themselves aren’t that weird, unlike with Ma’ipalaoa Road. But to a native English speaker, they do look like an unpronounceable mess of random letters.

Let’s pop back down to Texas for a second. Hairy Man Road may have gotten its name from an actual hairy man that was rumored to wander down the street in the days gone by.

We don’t know whether that’s true. But the road is definitely there in Round Rock if you want to go check it out.

15) Chicken in the Woods Road

This is one of those names that’s so weirdly specific that some particular event must’ve inspired the name. We couldn’t find anything, but it’s probably safe to assume that at one point in time, there was a chicken in the woods and that was a big deal.

There are a few really nice-looking cottage resorts on this road though, right on a bunch of lakes. Why not go on a hiking vacation and see if you can find the chicken?