We hope you’ve eaten already, because this will get gross. A Japanese woman recently found herself living in a real-life horror story after having a meal of sashimi.

The Japanese delicacies of sushi and sashimi have absolutely exploded in popularity worldwide over the past couple of decades. While once a niche dish for the adventurous, it’s now harder to find a city without at least a couple of sushi restaurants than one with none.

For those who have been living under a rock, the main ingredient of sushi and sashimi is raw fish. In sushi, the slice of fish is served generally on top of or wrapped in rice. In sashimi, the raw fish is the entire dish.

To some, any raw animal products sound like a stomach-churning experience. Sushi is delicious, though, and it’s not like a rare steak is all that different of a thing.

That being said, it’s also a fact that any raw meat carries with it the risk of bacterial or parasite infection. In many countries food safety laws are in place in an attempt to prevent the serving of unsanitary meat.

But even with the greatest precautions, things sometimes slip through the gaps. That’s precisely what happened to a 25-year-old woman in Japan, whose case was featured in the July issue of The American Journal of Tropical Medicine and Hygiene. 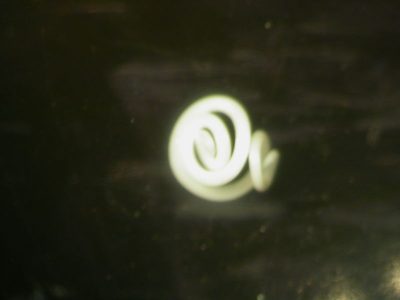 The unnamed woman had spent a night out, enjoying a nice meal of sashimi, supposedly with her friends. The next morning, she woke up with an unusual ailment – not a hangover, but a sore throat.

She was experiencing what doctors appear to call “tingling throat syndrome”. The symptoms include irritation and pain in the pharynx – a fancy word for the back of the throat – and cough.

While unusual, it’s not too uncommon to have a sore throat after a night out, especially if the party happened to get loud. In that case, though, you’re usually fine by the end of the day.

That wasn’t the case with the woman of our story. Her throat irritation persisted, and after putting up with it for five days she finally decided to see a doctor.

As is usual with throat ailments, the doctor grabbed that small light they use and told the woman to open wide. The doctor immediately confirmed that there was indeed something wrong with her throat.

On the woman’s left tonsil was a small, black, wriggling worm. And it was molting, which means that it was apparently having a grand old time.

Without further ado, the doctor grabbed a pair of tweezers and plucked the worm out. Lo and behold, the woman’s throat problems abated in a couple of hours afterwards.

They even managed to snap a photo of the worm. And you can look at it!

The worm extracted from her tonsils was the larval form of something that goes by the name of Pseudoterranova azarasi. It belongs to the family Anisakidae of nematodes, and that’s a family you don’t want to have Thanksgiving dinner with.

Anisakidae are parasitic roundworms that infest fish – and people who happened to consume them. If ingested, they cause a condition known as anisakiasis that comes with a delightful cocktail of symptoms, according to the Center for Disease Control and Prevention.

Included in this happy bunch are anything ranging from “vague abdominal discomfort” to searing gastrointestinal pain, nausea, diarrhea, vomiting, jaundice, increased heart rate, muscular weakness, numbness of skin, and – the worst of all – mood swings and irritability. Go figure.

The woman in this particular case was lucky that the worm got stuck in her throat. Had it made its way into her stomach… Ew.

There’s also an additional quirk to anisakiasis. It shares many of its symptoms with a slew of other stomach-based illnesses, so diagnosing it accurately can be difficult.

The only surefire way to do that is to mimic the Japanese doctor and check if you can see the worms. Sometimes that’s pretty easy, though – the CDC says that in some cases patients start coughing up living larvae.

Anything to make the doctor’s job easier, I suppose.

We’d love to say there’s a silver lining to this whole story, but it’s kind of hard to find one. Especially when the doctors say that these cases are becoming more and more common.

“Consuming raw fish, including sushi and sashimi, has become more popular and the number of reported cases has markedly increased 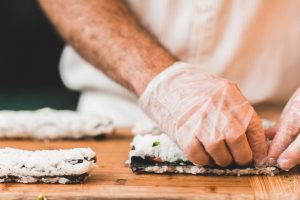 Still, the chance of getting sushi-borne parasites in your guts is pretty low. This is particularly true if you choose to patronize reputable restaurants serving high-quality, fresh fish prepared following appropriate practices.

Of course, laws are different in each country. So, if you’d like to take the chance of parasites completely off the table, the answer is simple – don’t eat raw fish.

But then again, that means you can’t partake in the delight that is a good sushi meal. These are the choices we have to make in life.

We can all probably make a pretty good guess about what the Japanese woman will choose from now on, though.