Did you read Woman Mauled by Bear in Her Backyard: Part One? Because this is part two.

There’re many factors adding to the bear sightings in Vermont. Anything from the population increase to a lack of rain limiting natural foods to unseasonable temperatures this fall.

The attack happened at a condominium complex in Winhall but wasn’t the only recent incident. Bears have also been spotted in nearby neighborhoods eating ornamental pumpkins, Isherwood said.

“Bears are intelligent creatures,” Stedman said. “They learn to associate people with food, because folks want to feed the birds, or they they want to put their garbage out. They don’t want to worry about it. These sort of things habituate bears to people, and it compounds over time.”

Dietl’s situation of woman mauled by a bear is said to be the wrong place at the wrong time. Her dog, Bodhi, returned home the following morning, safe and unscathed. Game wardens searched the area for the mama and cubs until 1:20 a.m. Wednesday night and into Thursday. The began again on Thursday morning.

According to wardens and biologists, a female bear had been seen regularly in the area with cubs this past summer and into the fall. Decorative pumpkins and other things showed signs that bears had eaten them. 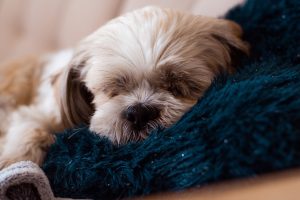 “We really feel lucky to live where live here in Vermont,” Montouro said. “We build condos in places where bears used to live, and we’re kicking them out. It’s not their fault.”

Bears are said to be rare in the area but Jaclyn Comeau, black bear project leader for the department, advises all residents should take “every step” necessary to prevent attracting the animals. The woman mauled by bear says others should listen.

“Increasingly bold and high-risk behavior from bears is due to Vermonters’ failure to take the proactive steps needed for safely coexisting alongside a healthy black bear population,” Comeau said in conclusion.

Lucky to be a woman mauled by a bear and survived. And her little dog, too!