A sailor falls aboard and the waves drag him under to a watery grave. But at the last moment, a beautiful mermaid pulls him to the surface, saving his life.

That’s stuff that only happens in fairy tales, right?

You’d think so, but that’s what happened at Catalina Island, California. The only difference is that the man wasn’t a sailor but a scuba diver.

Three men were diving off the island’s coast when one of them lost consciousness. A trio of mermaids heard their cries for help and swam to their rescue.

Before you decide to go try your luck at Catalina Island, though, you should know that the fish-tailed women weren’t true fantasy creatures. Instead, they were a group of show divers donning one-piece mermaid tail fins who happened to be practicing near the men.

But hey — it’s about as close to the real thing as you’re ever going to get. And we’re sure the men aren’t complaining. 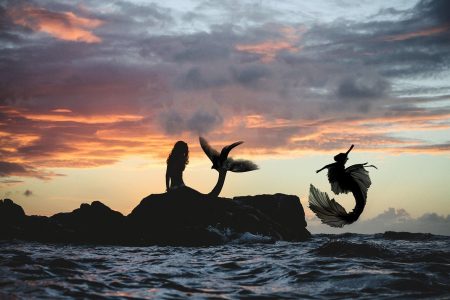 ‘Thought I Was Looking at a Dead Man’

Javier and Josh Claramunt and Pablo Avila were visiting Catalina Island on October 23. They decided to go scuba diving, but toward the end of their dive, Avila suddenly lost consciousness and began to quickly sink underwater.

“Honestly, I thought I was looking at a dead man,” Claramunt told Inside Edition.

Unable to pull him to the surface, Claramunt and his father did the only thing they could. They started calling for help in case anyone happened to be within earshot.

Luckily, somebody was. Elle Jimenez — a 33-year-old former dancer and professional diver and mermaid performer — was holding an open-water advanced mermaiding course in the vicinity of the men.

Attending the course were four students, including Elaina Marie Garcia, 26, and Chin Burger, 37. In addition, Jimenez’ boyfriend and professional underwater photographer Darren Leonardi was in attendance.

“This was my first time teaching the course in California,” she told Fox News.

She couldn’t have picked a more perfect location for her course. Around midday, Jimenez suddenly heard cries: “Help, help! He’s blacked out!”

Without a second thought, Jimenez, Garcia, and Burger sprang to action. Still donning their mermaid tails — or monofins as the devices are professionally known — they began swimming toward the three men.

Each of the women holds a Professional Association of Diving Instructors (PADI) certification in best diving practices. The other students didn’t have such qualifications, so they made the smart choice of deciding to stay out of the way.

“We safely kept our distance ensuring we did not complicate the situation,” said Julie Andersen, PADI Worldwide global director of brand, who witnessed the incident.

As fast as they could, the group of mermaids swam over to Claramunt. The man could barely believe her eyes when the fairy tale creatures emerged from the waves.

“I get three ‘helps’ out and then honestly, just a troop of mermaids pop up out of the water. It’s just like a Disney movie,” he recalled.

Jimenez said that Garcia was the first on the scene, with Burger and Jimenez arriving only moments after. By the time they got there, Avila was foaming at the mouth, leading Jimenez to suspect that he’d suffered an air embolism.

This condition can happen to divers as air bubbles form in their blood vessels. It’s life-threatening and requires immediate attention.

“I started removing his weights and equipment because it was making it difficult to keep him above the surface,” she said.

Garcia gave Avila rescue breaths in the water while Jimenez and Burger unbuckled his weights and gear and let them sink into the water.

“I picked up the weights, which must have been about 35 pounds, and it immediately pulled me under. I had to let it go into the depths to stop myself from drowning,” Jimenez said.

Meanwhile, Claramunt panicked and began to hyperventilate. One of the three mermaids helped him calm down enough to function, and together they pulled the three men to the shore.

At the beach, one of the mermaid students who works as a paramedic started giving Avila CPR. The resuscitation was a slow process, but eventually, it worked.

“It felt like forever before he started breathing again. It was a few hours before he woke up and finding out that he was ok was such a relief,” said Jimenez.

On-duty paramedics later took Avila to a decompression chamber. Each of the three men has since fully recovered.

Jimenez gives a lot of credit for the successful rescue operation to PADI’s training courses. Thanks to the training, she said the trio of mermaids didn’t really have to think as they helped the divers.

I think we all went on automatic and our rescue mode turned on. There is a misconception about mermaids, I don’t think people realize just how trained we are in life-saving skills,” said Jimenez.

“I feel people underestimate what it means to be a mermaid but we’re free divers and trained in sea rescue.”

In fact, the mermaid gear may have helped the women in their efforts. A trained and skilled monofin user can swim with incredible efficiency, which went a long way in getting Avila and the others out of the water in time.

The Claramunts and Avila agree. The first two reunited with Jimenez, Garcia, and Burger while Avila is recuperating, and they’re each immensely grateful.

“We had seen the mermaids before starting our dive and were thinking how cute they were. Little did we know how well-trained they really are,” they said.