Today, the annual holiday calendar is pretty standardized, at least in the Western world. But that doesn’t mean there’s no room for regional variation.

The U.S., for example, has Thanksgiving, an unknown tradition in Europe. But counterbalance that difference Europe has…

A lot of stuff. Some European folk festivals stretch back hundreds, if not thousands of years and they can get pretty bizarre.

Here are some strange but mostly fun traditions from Europe.

The Burry Man’s Parade is a great example of a hyper-local event. It’s celebrated only in the town of South Queensferry in Scotland, on the second Friday of August.

On the morning of the event, a local man dons a protective undersuit before being covered entirely, from head to toe, in burrs. These are the spiky, sticky flowerheads of a species of burdock that’s abundant in the area.

In his pointy suit, the Burry Man then parades a seven-mile route through Queensbury for nine hours or longer. He makes a number of stops along the way, including taking a moment to wet his whistle with a sip of whiskey at every public house in town.

The Burry Man does this trek because… Well, no one’s really sure.

The purpose of the Burry Man has been long lost to time. He may have been an omen of good luck to ward off evil spirits or even a sacrificial victim.

But who cares why he does it, as long as everyone has fun?

Mari Lwyd is a Welsh Christmas-time tradition, first recorded around 1800. But this festival has very little to do with the modern holly jolly spirit.

The Mari Lwyd is a bare horse’s skull, attached to a pole. From the skull hang colorful ribbons and a long white sheet that hangs down to disguise the carrying pole and the carrier.

The skeletal horse head visits various houses in the village, singing a song about how the homeowners should let it in. They, in return, sing a verse offering an excuse why the Mari Lwyd can’t come in.

This lyrical back and forth continues until the homeowners run out of excuses. At this point, the Mari Lwyd is allowed to come in and have a snack and a beer.

The exact tradition varies slightly from village to village. Like with the Burry Man, people have forgotten the origins of the Mari Lwyd, but it’s most likely a remnant of an ancient pagan festival.

The Kukeri festival of Bulgaria is potentially the oldest festival on this list. It’s said to date all the way back to ancient Thracia and the celebrations of the local cult of Dionysos, the Greek god of wine, fertility, and ritual insanity.

During the festival, townsmen dress in elaborate costumes depicting Kukeri, a fertility spirit. The costumes can range from hairy creatures straight out of a Dr. Seuss book to more conventional monsters and demons.

Around New Year and before Lent, the costumed men dance and cavort through villages, ringing large bells. The ritual is intended to scare away evil spirits and ensure a good harvest in the coming year.

Kukeri would traditionally perform their dance at night because for one reason or another the beings shun sunlight. These days, however, the parade generally takes place during the daytime, concluding with a large Kukeri dance at the town square. 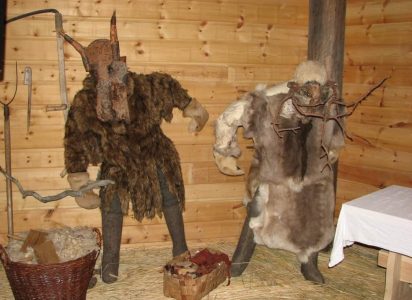 Before the modern Santa Claus found his way to Finland, the Finns had their own roughly equivalent of the character. But unlike the red-clad grandpa, there’s nothing jolly about Nuuttipukki.

Nuuttipukki — translating roughly to Knut’s Goat — is a goat-headed, scary being, played by a man in a mask and a hairy leather coat. On Saint Knut’s Day on January 13, he would conclude the Christmas season by going around town and visiting houses.

Unlike Santa Claus, Nuttipukki doesn’t bring gifts — he demands them. If the homeowners didn’t provide him with some food and a stiff drink, he would do something to damage the household in retribution.

Today, the tradition is mostly dead. It’s only carried in some local areas, and instead of a scary man, the character is now played mostly by children.

But the Nuuttipukki tradition still sort of lives on in the Finnish version of Santa Claus. In Finland, Santa is known as Joulupukki, or Christmas Goat.

Did you think baptisms are usually fairly dull ceremonies? Then you should visit Castrillo de Murcia in Spain during El Colacho.

This festival takes place every summer on a Sunday following the Feast of Corpus Christi. On the day, men dress up as colorful devils in red and yellow suits and run around town, insulting people and lashing them with whips.

Their mischief comes to an end when a drum announces the arrival of the black-dresses atabalero representing the forces of good. They drive the devils away, but they get to perform one last stunt before leaving.

Babies born during the previous year are placed on the streets on wide mattresses. The devil actors leap over them on their way out, taking the babies’ sins with them.

We just have to ask — what sins could a newborn baby possibly have committed? And what happens if a devil trips on the babies? 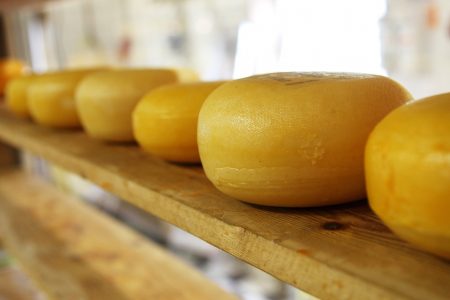 Finally, we arrive in Gloucester, England. Here, there are no baby-jumping devils, hairy men in masks, or horse skeletons — there’s only a hill and a wheel of cheese.

The Cooper’s Hill Cheese-Rolling was first documented in 1826, but even at that time, it was already an old tradition. The event involved rolling a 7-to-9-pound wheel of cheese off the top of Cooper’s Hill.

After giving the cheese a head start, competitors start racing after the cheese on a 200-yard-long track. Whoever manages to cross the finish line at the bottom of the hill wins the cheese — and it’s preferred if the winner catches the cheese before finishing.

There’s just one problem. The cheese can reach speeds up to 70 miles per hour and it’s been known to careen into the spectating crowd, causing sometimes serious injuries.

In the interest of safety, the cheese was replaced with a soft foam replica in 2013. However, the winner still gets to go home with the real thing.