Sarah Dietl, 43, was the woman mauled, then hospitalized and treated after the bear attack. It happened on Wednesday night, November 7th, 2022.

She went into her Vermont backyard to let her Shih Tzu out of the house late that night. She recalls the time at just before 10 p.m. when her dog went out and chased a bear cub up a tree.

This prompted the mama bear to attack.

“She came running out of the dark. She ran right to me,” Dietl said Thursday after the woman mauled was hospitalized. “It was terrifying.”

Robert Montuoro, fellow homeowner, said the bear was so close to the door he was able to hit the cub on the head with a flashlight. The bear let go of Dietl, but that wasn’t the end of the fight.

“Once I pulled Sarah into the house, the bear charged the door,” Montouro said, admitting how terrified he was and that he slammed the door in its face. 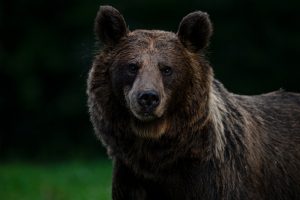 The attack led to 15 staples in the scalp for mauled woman Dietl. She was also treated at Southern Vermont Medical Center in Bennington for a “mangled hand” along with cuts and a gash in her side.

The warden director of the Vermont Fish and Wildlife Department, Col. Justin Stedman, said that bear sightings in Vermont are “the highest level than we’ve ever had” in comparison to past years.

“Before letting pets out at night, I would urge Vermonters to light their yards and make plenty of noise to allow wildlife in the area time to move on,” Kyle Isherwood, a game warden, said in a statement. “Along with securing food that could attract wildlife into a developed area, steps like this are important for the safety of people and wildlife.”

Crazy right, to do something as normal as letting your dog out, just to be the woman mauled by a bear? For Woman Mauled by Bear in Her Backyard: Part Two, click the link.