While at a Goodwill in Austin Texas, Laura Young found a bust under a table with a yellow price tag. “Clearly antique—clearly old,” Young, who runs her own business as an antiques dealer was intrigued.

The price tag was haphazardly affixed to the busts right cheek. The tag read $34.99 and it seemed like a deal. Young bought the bust and brought it to the car, with the help of an employee. 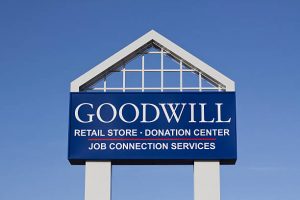 The 50-pound marble statue was buckled into her passenger seat and driven home. It would be one of the easiest journeys it had taken thus far. Turns out it was a Roman bust.

Young of course googled the bust as soon as she got home. When she looked up Roman busts she thought, “They look a lot like my guy.” So she reached out to some auction houses in London.

Sotheby’s confirmed that the sculpture was older than she thought, and that it dated all the way back to the late 1st century B.C. or early 1st century A.D. It was later identified as a portrait bust of a Roman general, a part of the art collection of Ludwig 1, a Bavarian king.

Up until Goodwill, the bust had been displayed in a replica of a Roman villa before being destroyed during World War II. Young found herself in the possession of a looted piece of 2,000 year-old art.

She couldn’t keep it or sell it.

She contacted an international art law lawyer to begin the complicated negotiations. In the meantime, the bust sat atop a credenza near the entryway to Young’s home. She even named him. Dennis.

For the rest of this story, read Woman Finds Stolen Treasure at Local Goodwill: Part Two.