You never know what you will see driving down the road. It could be anything, but a pool on the roof of a car, with kids in it? Bet you weren’t expecting that.

After seeing a white Audi Q5 driving down Illinois Route 2, a concerned citizen phoned the police and said that a large blue inflatable pool was balanced on the roof of the vehicle.

Mind you, this is a four-lane highway outside of the downtown area. So it’s no wonder this stunt freaked people out.

Two young children, kids,  were in the pool as it was driving down the road. Are you kidding me? 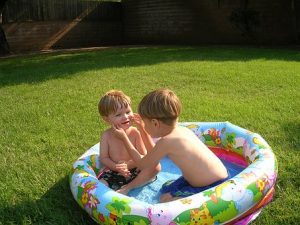 The Dixon Police Department said in the press release that officers had searched the area in order to find the vehicle. When they found it, it was still driving down the road.

They stopped the vehicle, obviously. Jennifer A. Janus Yeager, 69, was arrested at the scene.

When Yeager was interviewed, she was asked why she would do something so dangerous, and illegal. ?”During the course of the investigation, it was learned that Yeager drove into town to inflate the pool at a friend’s house and had her two juvenile daughters ride inside of the empty pool to hold it down on their drive home,” according to the press release.

Officers took pictures and posted them to their Facebook page. The post went viral, of course, and was shared and commented on thousands of times. Yeager was taken to the Dixon Police Department where she was processed and released after posting bond.

She has yet to enter a plea and it is not known if she has retained an attorney to speak for her. Yike.