Our weird world tour began in Europe, visited Asia, and went through Africa. We’re nearing the home stretch, but the trip isn’t done quite yet.

In this fourth part of our Weird Tourism series, we’ll marvel at the strangest sights and sounds of Latin America. There’s a lot of wild and bizarre nature on the continent that’s home to the Amazon, but there are also incredible manmade structures to see.

So, buckle up as we go on a ride through all the strange and stupendous sights of South America.

The Capillas de Mármol, also known as the Marble Cathedral or the Marble Caves consists of three natural limestone formations. And what formations they are.

During low tide, you can enter the nearly symmetrical caves on a boat. Glacial water runoff from the Patagonian mountain has carved the marble walls to be perfectly smooth.

When the light hits the caves and water right, you can marvel at a million shades of blue — some of which you’ve probably never seen before. Just make sure to visit in the summer, since during other seasons the caves are mostly underwater.

Yes, it’s another cave. But the Cueva de las Manos — or the Cave of Hands — is a place history has touched, literally.

The walls of the cave are covered with hundreds of handprints, some of which are 9,000 years old. Mixed in with the hands are rock paintings and similarly stenciled prints of animal feet.

Archeologists don’t know exactly who made the handprints or why. But hovering your own hand above one of the prints will have you wondering if they were all that different from you.

Santa Cruz del Islote is a tiny artificial island, some 15 miles off the northern coast of Colombia. It measures only 700 by 390 feet, making it a bit bigger than a football field.

And it’s one of the most densely populated places on the planet. At its highest, Santa Cruz del Islote boasted a population of 1,200, making it more packed than Manhattan.

The island was built by local fishermen sometime in the late 19th century. Today, it has grocery stores, a school, a restaurant, and a nightclub, so you can kick back and relax — just don’t expect much privacy.

4) The Island of the Dolls — Mexico City, Mexico 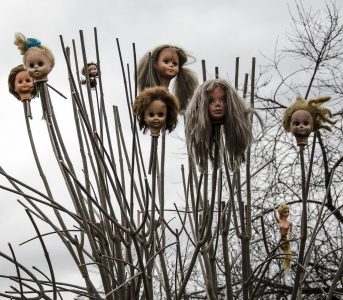 The Island of the Dolls (La Isla de las Muñecas) is one of the creepiest places you’ll ever visit. Located within Mexico City, the island is filled with old decaying dolls.

They hang from the trees and buildings while severed doll heads and limbs on sticks line the paths. The place is terrifying even in broad daylight, but once the night falls… We’re not saying the dolls start moving, but we’re not saying that they don’t.

According to legend, a man called Don Julian Santana Barrera brought the dolls to the island. After he failed to save a drowning girl, he began to gather dolls on the island to appease her departed spirit.

Go for a visit and let us know if you think he succeeded. 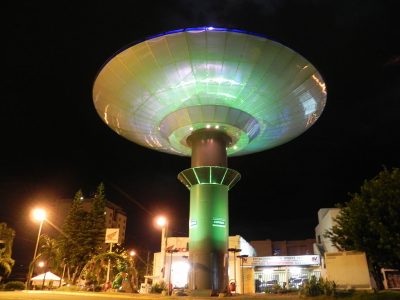 The Nave Especial is the water tower of the town of Varginha in Brazil. But why is it shaped like a UFO?

That would be because of the Varginha Incident. In 1996, two young women reportedly came face to face with a bizarre, thin alien creature. According to the story, its corpse was later taken away by the Brazilian military.

Since then, Varginha has become a hot spot for UFO and alien sightings. But whether or not you can spot an extraterrestrial, the water tower is a sight worth seeing. Just be careful that you don’t get probed.

6) Shrine of the Most Holy Death — Tepito, Mexico

The cult of Nuestra Señora de la Santa Muerte — Our Lady of the Holy Death — is a local religion in Mexico. One of the main shrines to the skeletal female saint is in the Tepito neighborhood of Mexico City.

The religion has its roots in the Aztec culture, in which death was venerated and worshipped. It has since mixed with Catholicism, although the Church renounces it and for decades, the government officially banned the cult.

But it survived, and today it’s one of the fastest-growing religions in Latin America, boasting up to 12 million adherents. At the shrine, worshippers leave offerings of food, beer, flowers, and cigarettes to La Huesuda, or the Boney One.

Ever wondered what the world might look like after we’re all gone? Go see Villa Epecuén and you’ll find out.

In 1985, a nearby dam burst and wiped Villa Epecuén off the face of the earth — but not completely. Once the waters receded, the ruined remnants of the village were revealed. 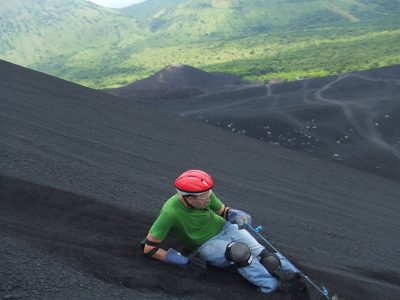 You often think of volcanoes as ancient formations, but that’s not true with Cerro Negro. This active volcano only burst through the ground in 1850.

It remains active to this day and has erupted approximately 23 times. But the black volcanic sand covering its slopes makes it a striking sight.

And it’s a popular destination among sandboarders. The sport is like snowboarding but on sand.

So grab a board and go slide down the sides of an active volcano. And then dare your friends to beat that story.