In the first part of our Weird Tourism series, we explored some of the most bizarre sights and sounds in Europe. We saw everything from a church of bones to a museum filled with nothing but penises.

But it’s time for us to continue our strange journey. This time we’re headed to the huge and wonderful continent of Asia.

There’s so much to see and do in Asia that we couldn’t possibly cover every weird attraction. But these — in our humble opinion — are the cream of the crop.

Japan is famous for its penchant for strange shows and giant robots. So why not combine the two and start our trip at the Robot Restaurant in Tokyo’s Kabukicho neighborhood.

The Robot Restaurant is really less of a restaurant and more of an entertainment show that you can watch while eating. The show includes dancers, videos, music, flashing lights — and of course dozens of robots.

Unfortunately, the restaurant closed down at the start of the COVID-19 pandemic, but its website still claims the closure is temporary. We hope so — it’d be a pity to lose this bizarre jewel. 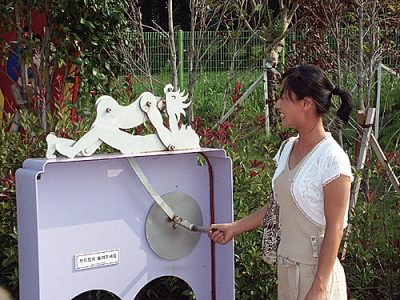 A word of warning — avoid Jeju Loveland if you blush easily. This self-described “artistic place filled up with sexual artworks” requires an open mind.

Jeju Loveland was originally a famous honeymoon location, and the sculpture park spawned from that. But it’s not just raunchy for the sake of being raunchy. The ultimate aim of the park is to offer sex education to couples who may not be exactly clear on how to get it on.

Wang Saen Suk makes for a natural next destination after the sinful debaucheries of Loveland. This Buddhist temple in eastern Thailand features a disturbing sculpture garden depicting Buddhist hell.

The most striking attraction at the park is the two huge, half-demonic human figures. Their emaciated forms tower above 21 lost souls, cursed to bear the heads of various animals for their sins.

Walking farther into the park reveals dioramas of sinners being torn apart by hellhounds, boiled alive in huge cauldrons, or crushed under enormous vices. What’s a vacation without a bit of fear for your eternal soul? 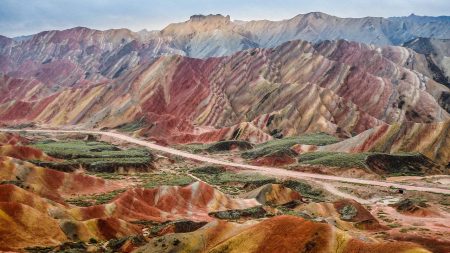 The Rainbow Mountains in China’s Zhangye Danxia National Park are one of the most striking sights on the planet. Their name is accurate — it looks like someone grabbed various cans of spray paint and went to town on the mountains.

Streaks of red, yellow, blue, purple, and green create an otherworldly canvas stretched over the mountains. The colors seem like something you’d see after eating the wrong kind of mushrooms.

But it’s all real and perfectly natural. The colors stem from the various minerals that stain the rock that surrounds them.

The island of Okunishima in southern Japan is sometimes also called Usagishima — or Rabbit Island. That’s for a good reason because this is one of the cutest places in the world.

Potentially hundreds of half-tame rabbits roam the island freely. They’re used to getting treats from visitors, so it’s not unusual to suddenly see a swarm of adorable furballs bounding your way.

But if that’s too saccharine for you, there’s another, much more sinister attraction on the island. The Poison Gas Museum, built in an old chemical weapons factory, details the use and effects of toxic gases in warfare.

How’s that for a mood whiplash?

It’s strange that the small village of Shingo isn’t better known around the world. After all, that’s where the grave of Jesus Christ is.

At least, that’s what they claim. In the 1930s, a young Shinto priest Takeuchi claimed to have discovered documents that detail how Jesus escaped crucifixion and came to live in Japan, where he died at the age of 106.

Conveniently, the Japanese government reportedly confiscated the documents at some point and they haven’t been seen since. Whether you believe the tale or not, Shingo is a great addition to your strange trip to Japan.

Sagada is a small town in the mountains of the Philippines. The jungles that surround it make for wonderful hiking trips — and then you notice the coffins.

For centuries, the local Kankanaey people have hung the coffins holding their dead loved ones on cliffsides. The coffins are very small, so their occupants have to be placed in a fetal position — just like they entered this world.

Only those who have distinguished themselves during their lives deserve a cliffside burial. The higher the coffin is hanged, the more prestigious its occupant is.

Oh, and most of the coffins were carved by their residents during their lives.

The Karni Mata Temple is dedicated to its eponymous Hindu goddess. It’s potentially more than 500 years old, and it’s full of holy rats.

More than 25,000 black rats occupy the temple, alongside a few especially sacred white ones. Each of the rodents is believed to be a reincarnated child of Karni Mata.

It’s a special honor to be offered food that the rats have nibbled on. Just watch where you step — if you accidentally kill a rat, you have to replace it with a rat made of solid silver or fold.