Happy Turkey Day, everybody! Or Thanksgiving, whichever you want to call it.

It’s a day for getting together with family (with appropriate pandemic precautions, mind you), eating and drinking well, and all around having a good time. Well, except for the 46 million turkeys that are eaten on this day every year.

But not every turkey goes gentle into that good night. Just to give you an update on our earlier story, the turkey that terrorized a park in Oakland for almost half a year has finally been caught and relocated.

It’s not just us modern people who exploit turkeys for our own gain, though. The birds have a long history of being a source of sustenance and providing valuable raw materials for native peoples in the Americas.

Now, a new study has analyzed a nearly millennium-old turkey feather blanket, crafted and used by past residents of the U.S. Southwest. Based on the blanket, the researchers were able to glean some fascinating insights into the life of these ancient Americans.

“Blankets or robes made with turkey feathers as the insulating medium were widely used by Ancestral Pueblo people in what is now the Upland Southwest, but little is known about how they were made because so few such textiles have survived due to their perishable nature,” Bill Lipe, emeritus professor at Washington State University and the study’s lead author, said.

“The goal of this study was to shed new light on the production of turkey feather blankets and explore the economic and cultural aspects of raising turkeys to supply the feathers.”

In honor of this Turkey Day, let’s take a look at what secrets the old blanket has to tell us.

A Blanket for the Ages

The blanket the research team from Washington State University analyzed is roughly 800 years old. According to the researchers, whoever wove the blanket was an ancestor of today’s Pueblo peoples – such as Hopi, Zuni, and Rio Grande Pueblos.

Measuring at 39 inches in width and 42.5 inches in length, it is made from roughly 11,500 turkey feathers. These feathers are wrapped around about 200 yards of cold, made from fibers of the yucca plant.

To determine how many turkeys it would take to make the blanket, the scientists counted the body feathers from the skins purchased from ethical Idaho turkey producers. The results? The blanket needed anywhere between four to 10 turkey-loads of feathers, depending on their size.

Blankets! Get Your Blankets!

Blankets such as this were instrumental in humanity expanding into higher altitudes and harsher environments. And for good reason – it gets chilly up in the mountains.

Originally, the residents of the U.S. Southwest would’ve used strips of rabbit skin to make twined blankets, the researchers say. However, around 200 CE they started replacing the rabbit skins with turkey-down blankets.

These blankets were made by women, and they served the Ancestral Pueblos throughout the entirety of their lives. They were worn as cloaks during cold weather, used as blankets while sleeping, and when their owner was laid to their final resting place, the blanket served as funerary wrappings.

“It is likely that every member of an ancestral Pueblo community, from infants to adults, possessed one,” said Shannon Tushingham, the study’s co-author and assistant professor of anthropology.

“As ancestral Pueblo farming populations flourished, many thousands of feather blankets would likely have been in circulation at any one time.”

Seems like the blanket business must’ve been booming for the ancestral Pueblos. At the expense of four to 10 turkeys per blanket.

But hold your horses! It turns out that the ancestral Pueblos weren’t quite as expedient with their turkeys as we are.

Additional results of the study indicate that the feathers 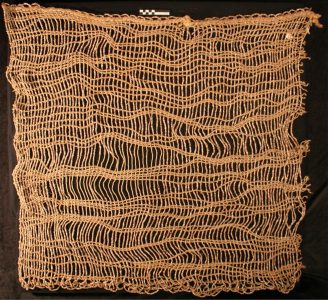 used for the blankets were harvested painlessly. Instead of plucking feathers from living – or dead – birds, the native Americans gathered them during the turkeys’ natural molt.

Now that they’ve said it, it makes sense. Turkeys can live up to 10 years, so letting them shed their feathers naturally gives you a whole bunch of them, several times a year.

If you killed the turkey, well, you can have the feathers already on it. And that’s all you’re ever going to get.

A Lesson in Respect

It seems the ancestral Pueblos didn’t eat turkeys like we do, either. Turkey consumption didn’t really take off until around 1100-1200 CE when over-hunting depleted other sources of meat.

Prior to this, it seems the Pueblos had a special reverence for the turkey. Archeologists have found entire turkey skeletons in constructed graves, indicating that they received a proper, solemn burial.

“When the blanket we analyzed for our study was made, we think in the early 1200s CE, the birds that supplied the feathers were likely being treated as individuals important to the household and would have been buried complete,” said Lipe.

“This reverence for turkeys and their feathers is still evident today in Pueblo dances and rituals. They are right up there with eagle feathers as being symbolically and culturally important.”

The researchers hope that their work can lead to a better appreciation for the importance of turkeys to Native American cultures. And perhaps we could all also learn a thing or two about treating them with the respect they deserve.

So, on this Thanksgiving Day, let us all be thankful for the turkey. They’ve given so much for us, both today and in the days gone by.