If you were to murder someone, how would you cover your tracks? Should you be devious and immoral enough, you might try assuming your victim’s identity and picking up their life where they left off.

Nobody would ever suspect that the person is missing if people kept getting, say, text messages from them. Right?

Well, to pull that off, you need to do your homework on the person you’re trying to impersonate. Otherwise you’ll end up like the Alabama man who has just been charged with the murder of his father.

Jeremy Farmer, 35, was arrested on February 10. According to the Indianapolis Metropolitan Police Department (IMPD), he is a suspect in his father’s disappearance, and has been charged with murder.

Farmer’s father, Fred, disappeared while on a hunting trip in late 2019. His family kept receiving text messages from Fred after he went missing, but something aroused their suspicions.

Fred had suddenly started using emojis. That wasn’t something the 58-year-old retired mechanic had ever done before.

Fast-forward to February 2021, and Jeremy is behind bars. And he might’ve gotten away with it all too, if he’d paid any attention to how his father wrote his texts. 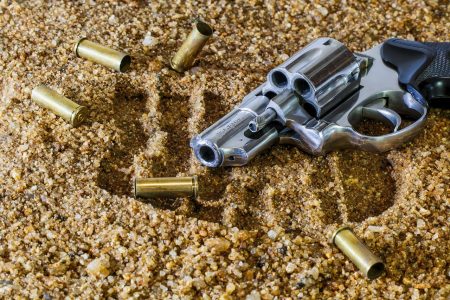 ‘Stuck in the Woods’

It all began in November 2019, when Fred Farmer ventured out to do some hunting. It was his usual routine – take his dog out, do some hunting, and finish the night off with a couple of cheap beers with his buddies at the American Legion Hall.

But that day, something was amiss. Fred left without his dogs, and in the company of people his family nor his friends recognized.

As the day went on, Fred stayed out later than usual. Then his daughter, Christina, got a text message.

“Hey, I’m stuck in the woods, I’ll be home in a week,” the text read, according to the Washington Post. It seemed Fred was extending his hunting trip.

At first, Christina believed the message.

“It made us feel like he was okay,” she told the newspaper.

But time passed and Fred never returned home. When his family took another look at the messages they’d received, they realized things weren’t quite right.

Fred’s family said that the man always used his phone’s text-to-speech feature to dictate his text messages. This resulted in long, run-on sentences with no punctuation.

The messages that they’d received weren’t like that at all. They consisted of short messages, with proper punctuation – and they used emojis.

As far as his family was aware, Fred had never typed so much as the basic 🙂 smiley in his life.

“All of a sudden, it sunk in. We said: ‘Those text messages don’t really sound like dad,’” Christina said.

The Search for Fred

On December 27, 2019 – more than a month after Fred had left for his hunting trip – the family reported him to the police as missing.  The IMPD launched an investigation and began looking for Fred.

As the search went on with no results, Fred’s family held a candlelight vigil for him at the American Legion Hall he used to frequent.

“Somebody knows my dad, and knows what happened. I’m just waiting to find out who did something,” Christina told the media at the time.

Meanwhile, the police started finding evidence suggesting that foul play was involved in Fred’s disappearance. Although they never found a body, they eventually told the family that they believed Fred to be dead.

Then, things started moving along. The IMPD found out that Fred’s cell phone was never in the woods where he was supposed to be hunting, reported the Washington Post.

Instead, the phone remained in Wayne Township, west of Indianapolis, until it shut off for good in January 2020. Investigating Fred’s bank accounts also revealed something fascinating.

Someone had made thousands of dollars’ worth of purchases using Fred’s debit card after he had disappeared. Surveillance footage at one of the stores showed Jeremy Farmer purchasing a 96-gallon trash can, bleach, latex glows, and plastic clothing with Fred’s card.

The cops also discovered that Jeremy had a history of attempting to steal money from his father and open bank accounts under his name. The contact details on Fred’s current bank account had also been changed to those held by his son.

The final nail in the coffin came when two people told the police that Jeremy had bragged about killing his father. According to them, the young man said he’d shot Fred twice in the head and hidden his corpse in a freezer.

When interviewed, Jeremy claimed that he’d last seen his father in November 2019, leaving for his hunting trip with his rifles and crossbow. But the police had acquired records showing that Jeremy had pawned his dad’s crossbow in January 2020.

The father and son also didn’t exactly get along. A witness told the police that they had argued about money shortly before Fred went missing.

“Roger and Jeremy did not have a stable relationship and Jeremy still blamed his dad for the way he was treated as a child growing up,” the witness said according to Washington Post.

There’s not much else to say. On February 10, 2021, the police arrested Jeremy, suspected of being involved in the disappearance and death of Fred Farmer.

The Marion County Prosecutor’s Office has charged Jeremy Farmer with his father’s murder.