Last week we published a list on unusual toys and treats with which to spoil your dog. Now, a new study has shed light on why your puppy deserves those treats.

The fresh research – published in the journal Current Biology – has found that puppies are born with a degree of knowledge in how to communicate with people. In other words, your pooch is hardwired to be a good dog and follow commands.

According to the study’s lead author Emily Bray, a postdoctoral research associate at the University of Arizona, there’s been a question of when exactly dogs learn how to socialize with people.

“There was evidence that these sorts of social skills were present in adulthood, but here we find evidence that puppies – sort of like humans – are biologically prepared to interact in these social ways,” Bray said.

Not only that, the researchers discovered why some dogs are better at following orders than others. According to them, it all comes down to genetics. 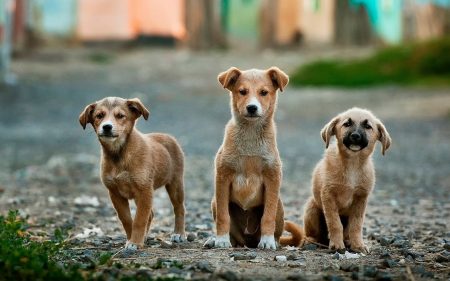 In a way, Bray has pretty a dream job. She has spent the last decades playing with puppies to conduct research in collaboration with service dog organization Canine Companions.

For this particular study, Bray’s research team had a horde of 375 eight-week-old puppies do a series of tests. Probably not all at once, or there would’ve been nothing but chaos.

The reason why they picked such young pups for the tests was to establish whether their skills to socialize with humans were natural or learned. The dogs were still living with their littermates and had had little human interaction.

According to Bray, this made it “unlikely that [their social behaviors] were learned.” In other words, the puppies were perfect for finding out if they knew how to socialize with people purely on instinct.

Go Get the Treat!

Each dog went through a series of four tests. In the first test, the researchers placed a treat under one of two cups and pointed at the cup the dog should go to.

Both cups also had a hidden treat taped to their inside so the researchers would know that the dog wasn’t just sniffing out the fresh treat. The second task was pretty much the same, but Bray placed a yellow block next to the correct cup instead of pointing at it.

The other two tests measured how eager the puppies were to look at human faces. In the first test, the researcher would read a script in “doggy-talk.” You know, the high-pitched, infantile way of speaking we all use when talking to our dogs and think no one’s watching.

While the researcher babbled on, another would measure how long it maintained eye contact with the reader. In another gaze test, the researchers put a treat into a sealed contained and recorded how often the puppy looked at the human for help.

So, what exactly did we learn from all this? Well, we now know that puppies know how to interact with people as soon as they’re born.

At the same time, some dogs performed better in the tasks than others. Since all puppies were future service dogs, the researchers knew their pedigree and could analyze if genetics had an effect on their abilities.

It turns out that it did. According to bray, genetics could explain more than 40% of the variation in how well the dogs followed orders and maintained eye contact.

“We found that there’s definitely a strong genetic component, and they’re definitely doing it from the get-go,” said study co-author Evan MacLean, assistant professor of anthropology and director of the Arizona Canine Cognition Center.

Another thing the researchers discovered was that although most puppies followed verbal and gesture commands, few tried to get help during the treat-in-a-jar test. According to the scientists, this could mean that puppies know how to respond to communication, but don’t know how to initiate it.

“In studies of adult dogs, we find a tendency for them to look to humans for help, especially when you look at adult dogs versus wolves. Wolves are going to persist and try to independently problem solve, whereas dogs are more likely to look to the social partner for help,” explained Bray

“In puppies, this help-seeking behavior didn’t really seem to be part of their repertoire yet.”

In many ways, the puppies’ behavior compares to that of human children. No, that still doesn’t justify calling them “furbabies.”

“If you think about language learning, children can understand what we’re saying to them before they can physically produce the words,” Bray said.

“It’s potentially a similar story with puppies. They are understanding what is being socially conveyed to them, but the production of it on their end is probably going to take a little bit longer, developmentally.”

There was a further point to the study other than getting paid to play with puppies, too. Bray suggests that the results could help pick out puppies that have the potential to become good service dogs.

What the researchers now have to do is identify the specific genes that contribute to dog-human communication.

“If you could identify a potential genetic basis for these traits, you might be able to predict, even before the puppy is born, if they are part of a litter that would be good service dog candidates, because they have the right genetic background,” she said.

“It’s a long way down the road, but there is potential to start applying this.”