In a surprise twist, a new study has discovered that diligent people with long-term planning ability and high emotional availability were responsible for hoarding toilet paper during the coronavirus epidemic.

When the COVID-19 lockdown measures began to kick in last March, practically every store in the US, Europe and in many other places in the world saw toilet paper fly off the shelves in the blink of an eye.

According ScienceDaily, some companies reported up to 700% increase in demand for toilet paper, and stories soon started emerging of people making five-figure purchases of butt wiping materials.

The study, performed by a team of Swiss and German scientists, attempted to shed light on what kind of personality features contributed to people normally frugal about toilet paper sudden lashing out in a shopping frenzy. 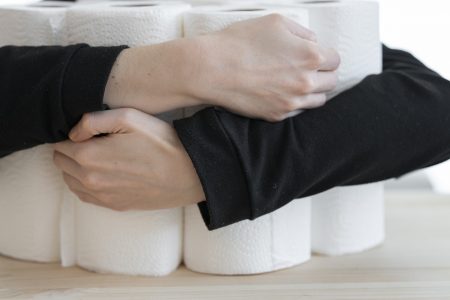 The study used an online survey to gather data from 1,029 adults from 35 different countries, who were recruited through advertisements on mailing lists and social media.

The participants were asked to fill out the Brief HEXACO Inventory, a short questionnaire that maps an individual’s personality according to six different measurements. They were also asked to define their current perceived threat level from COVID-19, and finally to describe their usual toilet paper purchasing and consumption habits.

The research team then evaluated the collected data according to a number of psychological principles and models and compared the results to established behavior models.

The scientists discovered that people were more likely to stockpile toilet paper if three personality traits came together just right. The same results held both in the US and in Europe.

First, the study found that people more worried about the coronavirus were more likely to start emptying out toilet paper shelves. “People who feel more threatened by the pandemic stockpile more toilet paper,” the researchers summarized.

Second, the results indicated that people who scored higher on the “emotionality” scale of the personality test were much more likely to become concerned about the pandemic.

“Around 20% of the differences in toilet paper consumption that were explained by feelings of threat were based on people’s dispositional tendency to worry a lot and generally feel anxious,” the researchers say.

While it makes sense that generally nervous people would also be more worried about the coronavirus, the study also found that the remaining 80% of the toilet paper hoarding cases did not happen due to inherent anxiety.

Instead, in these cases the behavior was fueled either by factors the scientists were not looking at in this particular research or on what they call “malleable external factors,” such as the effectiveness of preventive measures taken by the local governments.

In a nutshell, the better governments inform their citizens and provide guidance on how to deal with the disease, the less likely said citizens are to start buying toilet paper they don’t need. Makes sense.

The third major discovery indicated that people who scored high on the “conscientiousness” scale – those with a higher sense of diligence, prudence and a tendency to plan for the future – were more likely to start hoarding toilet paper.

Unlike what you might expect, orderly and longer-sighted people are not immune to panic buying and the study found that their habitual tendency to plan ahead ultimately resulted in them hoarding toilet paper.

To combat these effects, the researchers suggest authorities should emphasize the ensured long-term availability of basic commodities in order to stop these otherwise well-meaning people from emptying out stores.

Unlike some earlier preliminary studies had indicated, lack of humility or solidarity with your fellow man was not an important factor when it came to buying excess toilet paper. Additional results showed that older people hoarded more toilet paper than young people, possibly due to harsher isolation measures imposed on them, and that Americans were more gung-ho for butt wipes than Europeans.

Putting it all together, it seems that the average toilet paper hoarder was not being intentionally malicious. Instead it was just someone concerned for themselves and their loved ones trying to make the best of a bad situation.

As stores and public places have begun to re-open, some of the hoarders appear to have realized just how ridiculous buying thousands of dollars’ worth of toilet paper was.

Some have swallowed their pride and accepted that they goofed up, but at least they now have a lifetime supply of toilet paper.

Others have been less accepting of their wasted money and have tried returning their purchases with varying in results. In the US, chains like Costco and Walmart immediately refused to accept returns on hoarded hygiene products. In Australia, a man who was trying to return $10,000 worth of toilet paper and hand sanitizer was famously denied a refund.

Unfortunately, reports are starting to come in that due to relaxed isolation measures, coronavirus cases are spiking again around the world. This new scare has resulted in toilet paper hoarding making a return in places like Australia and Texas.

Will we ever learn?