Is there a monster lurking in Scotland’s famous Loch Ness? New pictures of a strange creature swimming through the Loch’s waters snapped by a British tourist have reignited the debate over whether Nessie might be real. 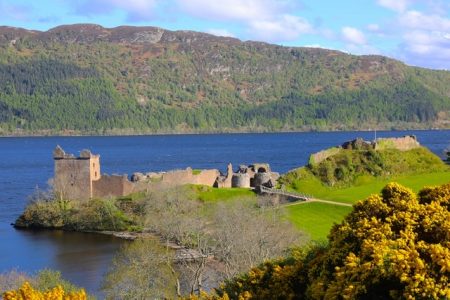 The photos were taken by Southampton resident Steve Challice, who was visiting Urquhart Castle on the shores of Loch Ness with his brother in September 2019.

Wanting a break from a crowd of other tourists that had just arrived at the castle, Challice began taking pictures of the opposing shore of the Loch, when he noticed what he described to the Daily Record as a “sort of ripple in the water.”

“I started taking a couple of shots and then this big fish came to the surface and then went back down again. It only appeared in one shot and to be honest that was something of a fluke. I watched for a while … but didn’t see it again,” he said.

He described the gray, dark-spotted creature emerging from the waves as having been around 30 feet away and approximately eight feet long.

Once the coronavirus quarantines hit, Challice was going through his vacation photos and rediscovered the pictures among the hundreds of others he had taken during his trip. The pictures were uploaded onto the Anomalous Universe Facebook group, where they caught the attention of other cryptid enthusiasts.

Many in the group questioned the authenticity of the pictures and even suggested the use of photo-manipulation techniques, such as CGI, to which Challice responded that he “loves the idea of CGI” but is “not that good at it.”

Even the photographer himself does not believe he caught something otherworldly in the pictures. “Personally, I know there has been some interest and some people are saying it’s the monster but I don’t believe that.”

“I have to say I don’t believe in the Loch Ness Monster and frankly I think if anything is there then there is a logical explanation for most of the sightings. My guess would be that what I captured was a catfish or something like that. As seals get in from the sea then I expect that’s what it is and that would explain why these sightings are so few and far between,” he told the Daily Record.

Some on the Internet began to make deeper inquiries into whether or not Challice’s pictures are genuine. Author Roland Watson, who runs the Loch Ness Mystery blog, began examining the photos in close detail. He describes what he has found so far in his blog. 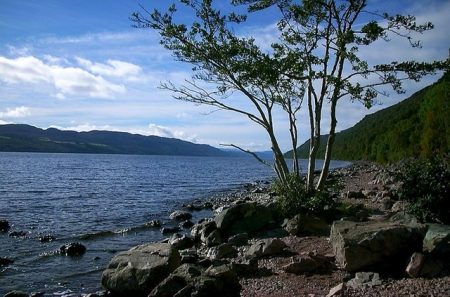 After looking into Challice’s history, Watson discovered that he does indeed make CGI artwork for a living. When Watson asked him about this, Challice explained that he “didn’t say he didn’t do CGI, just that he’s not that good” at it.

Then, Watson requested for the original photos of the creature, but was instead delivered pictures that were quite clearly compressed. Additionally, the pictures’ internal data showed that they had been edited in the popular photo manipulation software Photoshop.

Watson asked Challice about this. “He replied that the image file had been opened by Photoshop and then saved as another file, as the original files were too big to send by email. That being said, a day or so later he sent links to download some larger files.”

But these new pictures posed another difficulty. From the data of the earlier pictures, Watson had been able to discover the type and brand of the camera they were taken on. The new pictures were in a wrong file format for them to have been taken on Challice’s camera.

Watson contacted Challice again and in the meanwhile continued his investigation. He found out from the new picture’s internal data that they too had been processed in Photoshop.

In fact, Watson suspects that they are the same pictures sent to him earlier, only blown up in size and converted to a different format.

“I could have performed further analysis, but at this stage, there are discrepancies which need to be answered first and which currently render this photograph unusable as evidence for a large creature in Loch Ness. However, I am in still in communication with the photographer about the issues raised,” said Watson.

He told the Daily Record, however, that if the pictures prove genuine, they would “easily rank among the top three” Nessie pictures of all time.

Challice still defends his photos as authentic and unedited, even when he doesn’t actually believe the creature in them to be anything strange.

“There are pics on Google showing large monsters with lots of loops like a snake or something and my image is nothing like that. I genuinely think, to this day, it’s just a big fish,” he said.

The oldest story of a monster living in Loch Ness dates all the way back to the 6th century, when the Irish monk Adomnán described a man having been attacked by an underwater beast while swimming.

One of the most famous photographs of the monster, knows as “the surgeon’s photograph,” was taken in 1934 and has been widely circulated, even though it has been proven to be a hoax.