It’s always been said, don’t hold in your pee. If you have to go, go. And especially if you’ve been drinking, beer, in this case.

A man drank all the beer and let it sit, in his system that is. But the beer only stayed in for so long.

He didn’t do it on purpose. It turns out that he fell asleep, read; passed the eff out. And thus spent the next 18 hours holding his pee while he slept.

A heavy night of drinking, yes, but to sleep for 18 hours after? Yike. 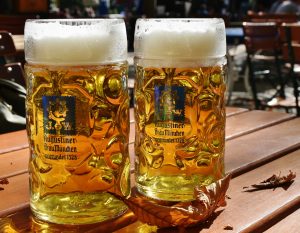 Mr. Hu drank 10 bottles of beer before his long night of rest. After having searing abdominal pain, he went to Zhuji People’s Hospital in Zhejiang, eastern China. A CT scan showed that his bladder was torn in three places.

The pain from not peeing was so intense that Mr. Hu couldn’t lay flat and after several attempts at going to the bathroom, he couldn’t do that either. He had another complication and one of the holes toward his abdominal cavity ruptured, forcing part of his intestines to split into his bladder.

Doctors told him this could be fatal if it was not fixed immediately but emergency surgery did save his life and he has since been let go from the hospital upon a full recovery,

These types of bladder explosions are rare but the hospital does say that there is a patient admitted every year with the condition. Apparently a belly full of beer is one of the  best recipes for tearing your pee sack, as it were.

“When you drink alcohol, it causes the body to produce more urine than usual, so that can potentially contribute to the bladder being full,” Dr. Bradley Gill, a board-certified urologist at the Cleveland Clinic in Ohio, tells Live Science.

He also says when “accompanied by an inebriated individual being less aware of this fullness,” this can result in “traumatic bladder rupture.” And so it did.