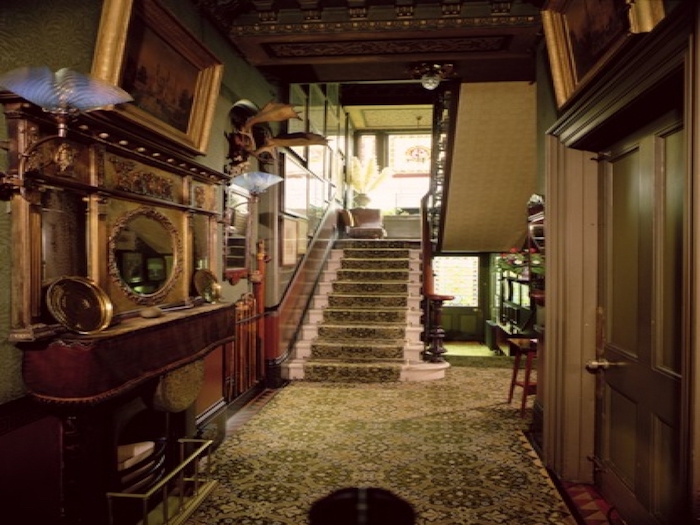 For most kids, a visit to Grandma’s house is like taking a brief vacation from life.

The normal rules don’t apply, and grandparents tend to spoil their grandkids from the moment they arrive until the second they leave, hands filled with fresh baked cookies and new toys that magically appear out of thin air.

For Lyons, a trip to Grandmas involved visits from beyond. She shared her story with us about the other people dropping by the old home to say hello.

“When I was a kid,” she writes, “the weird occurrences began around the age of 5. The first one I can remember involved a beast chasing me through the house. The minute it pinned down in my dream, I sat straight up in bed, but couldn’t speak or open my eyes.”

The next episode happened not long after the dream. Lyons was laying down in the middle room and heard footsteps ascending the steps. The sound of shuffling feet seemed to stop just outside the door of the room. Then, she heard her name whispered in the hall.

“I jumped into bed, tucked my head under the blankets, and forced myself to sleep in broad daylight. This happened a couple of times.”

Eventually, Lyons started catching glimpses of the apparition floating around the home. “The steps inside the house were incredibly steep, almost like climbing a tall ladder, and out of the corner of my eye, I’d occasionally catch a glimpse of a small girl with a disfigured face. She was following me up the stairs.”

Lyons experiences other small oddities in the years that followed including an unwanted guest who demanded control of the television.

“When I was about 13, I was left in the home alone. I was watching TV in the middle room, got bored, and turned it off and go downstairs. It was an older TV, the kind with two dials on the front panel to change stations and buttons for the volume and to turn it on and off. When you turned it on or off, it made a loud ‘POP’ sound. So I turned it off and walked downstairs. As soon as I got into the living room, I could hear a faint sound coming from back upstairs. I went back upstairs to find the TV on again. I figured maybe I didn’t push the button in all the way and it popped out. So I turned it off again and went back downstairs. And it happened again.”

Lyons ran upstairs, ripped the TV cord out of the wall, and sat outside on the porch until her mom returned to the house.

“The sound of shuffling feet seemed to stop just outside the door of the room. Then, she heard her name being whispered in the hall.”

Lyons paid visits to her mother’s mom numerous times until Grandma passed away. The house stayed dormant until Lyons was in her 20s. She was newly married and needed a place for her and her new husband to live.

“It’s hard to say no to a free house, but I was forced to face all of my old experiences. I was reluctant but eventually talked myself into the idea that living in the dwelling was the best idea.”

Lyons realized not long after moving in that the spirits contaminating the house hadn’t forgotten about her after all those years.

“The first incident occurred when I was putting my daughter to sleep in the first bedroom. It’s the bedroom closest to the bathroom. I had an out-of-body experience. I could see myself standing in front of the bathroom mirror except I was actually in the next room laying beside my daughter.  Suddenly, I felt like my entire body was in a giant vacuum being sucked towards the bathroom mirror. It feeling was so intense that I slowly put my arm over my daughter, fearing she’d be sucked up too. Eventually, the pressure became so great that I just passed out.”

Lyons occasionally battled a form of sleep paralysis on almost a nightly basis where she couldn’t move but was completely aware of her surroundings. I did not see anything weird; I just felt a disturbing presence. She never had issues sleeping in other places, but as soon as she laid down in the house, it would happen.

“I could not fall asleep in any room except my bedroom, which once belonged to my grandmother. When I slept in my grandmother’s room, the door had to be closed, and the hallway light had to stay on. It was the only way I could fall asleep.”

Lyons kept quiet about all her experiences. She told no one over the years, not even her husband. One afternoon, she finally got up the nerve to discuss the hauntings with her aunt who herself grew up in the same house.

“I talked to my aunt. I didn’t tell her what I had experienced but tried to lead the conversation towards talk about the paranormal.  I did not want to sound like a lunatic by telling her everything I’d witnessed as a kid, and now as an adult, but it felt like I was slowly losing my mind. I joked about the old house and how when I was a kid I had an imaginary friend who lived in the house. She was a little girl with a disfigured face.”

Suddenly, her aunt’s face lost all color. She was quiet for a moment and then told her this story from her youth.

“She was once deathly ill. She was laying in bed and had what she thought was a dream until she realized she was wide awake. A disfigured face floated above her bed and called to her. The next day she was completely healed. She went on to tell me that she told my grandmother about the floating face and my grandmother replied, ‘Yes, I sent her.’ She went on to tell me that my grandmother was once married to a Native American healer. He died before I was born. She believed that he had shown my grandmother some ‘tricks of his trade.’ I don’t know that I believed her because I am naturally skeptical but I was looking for any real answers.”

She went about her life and tried to act as though everything inside the walls of the home was copacetic. She lived each day frantically trying to keep certain doors closed and specific lights on in an attempt to keep the visions at bay but silently she was falling apart inside.

“At this point, I had to confess to my husband what I had been going through and why I needed doors closed and lights on. He admitted that he also always felt something weird about the house. He never had a sighting, but more than a few times things had magically moved even though he knew no one had touched them. Relief immediately washed over me. I felt a little less crazy.”

After her admission, the visions worsened, and the poltergeist even followed her outside the house.

“I was driving to my mom’s house to get away from my house. I began seeing people. They were everywhere, in the corners of my eyes. They weren’t just shadows. I could see the color of the clothes they were wearing, their shapes, the kind of outfits they had on, but the moment I would look they would disappear. I parked and saw a man standing next to my car window. He wasn’t there, but in the shrubbery next to my parking spot, there was a memorial stone. On another drive, I saw a man standing in the middle of the street, so I swerved my car to avoid hitting him and looked back to see he had disappeared. I pulled over and started to pray while crying hysterically.”

With nowhere else to turn, Lyons reached out to a cousin, the son of the aunt she’d spoken to about the visions.

“His voicemail picked up, and I poured my heart out. He called back as soon as he got the message. I took the entire family to my mom’s house for the night. He said I had to get out of the house. He had told his mom about all of the strange occurrences. He said that my grandmother said those exact things happened to her on the night of her heart attack. She told my aunt those stories in the hospital where she later died. My aunt feared if I didn’t leave, I would die too. So I moved out of the house to next day. I sold it and everything inside and moved. From that day forward, everything stopped. My life went back to normal.”

Do you have an odd, interesting or amazing story you want to share? Submit it here.