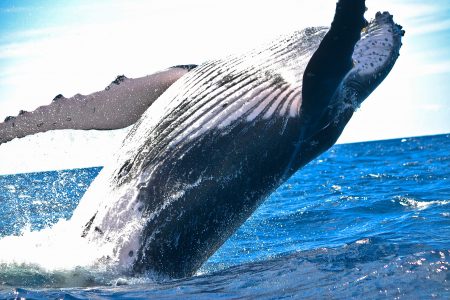 There you are, swimming in the ocean, photographing and recording sharks eating bait balls. Normal weekday. Then you’re swallowed by a whale. But the whale doesn’t even want you. It SPATS you out like you’re bad meat. “This is NOT the Jonah I asked for!”

South African Scuba Diver, Rainer Schimpf, had reality smack him in the face. Reality took the guise of a 45 thousand pound Bryde’s whale trying to swallow him head-first.

He’d been filming sharks during a sardine run. That’s where different marine animals such a seal, dolphins, penguins, and of course, sharks gather fish into bait balls.

He was snorkeling at the surface of the water off Port Elizabeth’s Harbour. His  attention was on keeping an eye on the sharks.

He said: “I was busy concentrating on the sharks because you want to know if the shark is in front of you or behind you, left or right, so we were very focused on the sharks and their behavior – then suddenly it got dark.”

“Once you’re grabbed by something that’s 15 tonnes heavy and very fast in the water, you realize you’re actually only that small in the middle of the ocean,” he told Sky News in London.

He said: “Once I felt something had grabbed me on the hip, I knew instantly it was a whale and my next thought was that, firstly, he can’t swallow me because I’m too big – so that was kind of instant relief.

“Also I realized that the pressure [on his body] didn’t increase, it actually stopped at a certain point

“So my next thought was that the whale may take me down into the ocean and release me further down, so I instantly held my breath.

“Obviously he realized I was not what he wanted to eat so he spat me out again.”