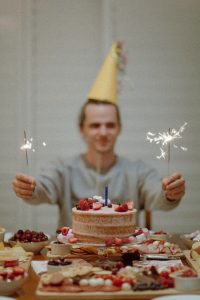 Birthday cards are so last decade, so why not rent out a billboard instead. That’s exactly what these brothers decided to do to celebrate their dad and his 62nd year of life.

Chris Ferry’s sons were in Florida when they wanted to celebrate his birthday but he was all the way in New Jersey. So they rented a billboard near Atlantic City and paid $2,000 for it.

It also included his phone number.

Of course, Ferry’s phone has been ringing off the hook since the billboard went up.

“Every state in the union, Luxembourg, Nepal, Kenya, Philippines. … That little island in the middle of the Indian Ocean, they tried calling me,” Ferry said.

Even Kelly Ripa and Ryan Seacrest of ABC’s “Live With Kelly and Ryan” tried to call Ferry and wish him a happy birthday. Oddly enough, his mailbox was full.

Ferry estimates he received more than 15,000 calls and texts, and that wasn’t even the final count. According to the sons, this billboard incident stemmed from a running joke and prank that they used to play on their dad.

“They would always tell the waiter [or] waitress it’s my birthday, even though it wasn’t,” Ferry recalled.

Although Ferry appreciated the prank, he stopped answering many of the calls and has since changed his voicemail. His new voicemail message starts with, “Thank you for calling to wish me a happy birthday, I really very much appreciate it …”

They are glad their dad was ok with their gift, but they say it will be hard to top off next year. In regards to next year they said, “I don’t know, maybe try to get a bigger billboard?”

The billboard is set to stay up until April 6th so chances are, Ferry will get a lot more messages and calls. All in all, I’d say it was a success.

Happy Birthday Chris Ferry, from all of us here at Oddee, and any one else who has seen the billboard!