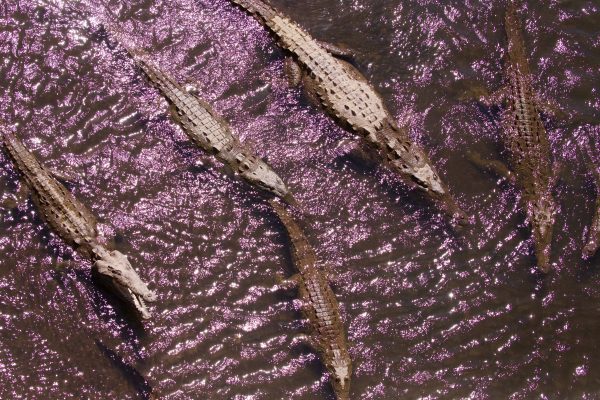 There you are, floating along, minding your own business. You and your pal from work are catching some fish to fry up later. Things couldn’t be better! That’s when you realize the boat is getting a bit lower. And… is that water inside the boat?! Then you remember about the crocodiles! Things start to go bad quickly.

Don’t you hate it when your fishing trips are ruined by unexpected disasters? Two men were left stranded in trees in the middle of crocodile infested waters in Kakadu National Park. Luckily their employer thought to come to look for them.

After not showing back up to work after two days, their boss decided to charter a helicopter in order to search for them. Wouldn’t everyone’s boss think to go to such trouble?

Dehydrated, hallucinating, and covered head to toe in mosquito and midge bites, the two men were finally discovered.

Their boat had dank, forcing them to climb into trees to stay safe.

Seeing the helicopter they used the only item they were able to salvage from their boat – the fire extinguisher.

“They started shooting it into the air and on the third time the helicopter spotted it,” CareFlight spokesperson Elliana Lawford ABC Radio Darwin.

“Our aircrew officer said it was a genius idea … it let off so much chemical smoke,” Ms. Lawford said.

After spotting the two, the helicopter radioed CareFlight who were able to mount a rescue operation.

“Unfortunately, when we arrived they were suffering from extreme dehydration, they had been having hallucinations, so our doctor essentially provided some treatments to rehydrate them,” Ms. Lawford said.

“They were covered head to toe in midge and mosquito bites, as you can imagine from being stuck in a tree on the South Alligator,” she said.

Both men were airlifted and said to be in stable condition at Royal Darwin Hospital.