The runaway pigs from Vermont caused $80K in damage. Then, they were corralled back to the Sugar Mountain Farm.

All of this happened in the small town of Orange, Vermont. It was farm workers and volunteers who heard about the escaped pigs and they trudged up and down the dirt road hill trying to get the pigs back to the farm.

The pigs were chased into the brush and ditches, and the people worked together to position themselves so that they could corral the sows and boars. It was not uncommon that these animals get away.

But according to Walter Jeffries most of his runaway pigs returned home. “The pigs have been allowed and remain to be allowed in the town right of way so cars are unable to pass, people can’t walk on the road because the pigs chase them,” Angela Eastman, Town Clerk said. 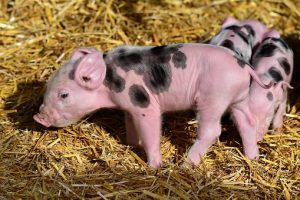 The pigs escape could cost Jeffries tens of thousands of dollars in fines from the town. The pigs have been spotted on and along the road for weeks which is creating issues for drivers and pedestrians.

Jeffries says that the fence was damaged by vandalism and that allowed 50 adult pigs and 200 piglets to escape. He thinks it was a former employee that led to the runaway hogs.

The fine is based on the number of pigs and totals $81,995.00, according to Eastman. “It is a public hazard,” she commented about the pigs.

The Vermont Agency of Agriculture is working with the U.S. Department of Agriculture Wildlife Service to try and come up with fair timing for how long the farmer has to recover the animals before officials step in to take some action. These runaway pigs sure caused a stir.

Anson Tebbetts, the Agriculture Secretary, said the agency is concerned about the public safety but also that this could create a feral population of pigs that could be destructive to property.

“We want to make sure travelers don’t run into the animals — hurt the animals, or hurt themselves,” he said. Holy cow, err pig.