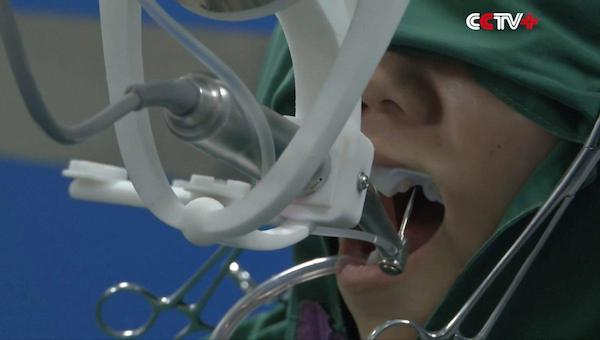 Don’t like going to the dentist? This story should assuage your fears. (Okay, probably not, but we’re trying to help.)

A robot dentist in China has worked on its first human patient. The anonymous female will go down in history as the first person ever to have oral surgery performed solely by a machine.

Human doctors were on hand for the procedure—should anything go wrong—as the robot autonomously implanted two teeth into the patient’s mouth using preprogrammed directions. Luckily, for all, the surgery went off without a glitch—or more than the requisite stitches, anyway.

Wuhan University Stomatological Hospital and Beihang University’s robotics team created the technology as an answer to China’s shortage of dentists and the frequent surgical errors committed by humans. About 400 million patients need new teeth in China, and researchers hope their invention helps fill the void.

The patient’s implants were made with a 3D printer and fitted within a margin of error of 0.2-0.3 millimeters, which is the surgical standard for this type of operation. Before surgery, the woman’s mouth was measured using a CT scan. Her robot doc was then programmed with the precise movements it needed to operate, which included angles and depth for the new teeth.

After a successful test, the procedure was carried out on the woman in Xi’an, the capital of Shaanxi province. She was administered only a local anesthetic (she’s a trooper!) From there, the machine was able to make adjustments to compensate for her movements.

China isn’t the only country to introduce robotic dental technology as a surgery option. In March 2017, the FDA approved Yomi, a robotic dental assistant made by Neocis Inc., a Florida-based tech company. Yomi can design dental procedures based on a patient’s CT scans with one difference—a human surgeon is still in control of the robot, but the device still guides the dentist according to the plan laid out and can also adjust for patient movement.