More than two years into the pandemic, we know COVID-19 causes all manner of side effects. But now, we unfortunately have to add a new one to the list.

There’s an additional level of horror to all the guys out there, since this effect hits where it hurts the most. Namely, it causes agonizing pain in your penis.

We know all this because we have a peer-reviewed medical report of the first such case. The unfortunate victim is an anonymous 41-year-old Iranian gentleman, how had to go a hospital due to his painful dong.

Writing in the journal Clinical Case Reports, radiologist Seyed Morteza Bagheri from the Iran University of Medical Sciences says the man initially received a positive result from a COVID test. His symptoms were mild — some fever, some coughing — but they passed without medication.

Three weeks later, the man was about to have an intimate moment with his wife. But in the middle of doing the deed, his erect penis began to hurt.

We’re not sure if he powered through the pain to finish his lovemaking. But we do know that his suffering didn’t stop there.

The man gritted his teeth for three days, but finally he just couldn’t take it anymore. He had to go see a doctor. 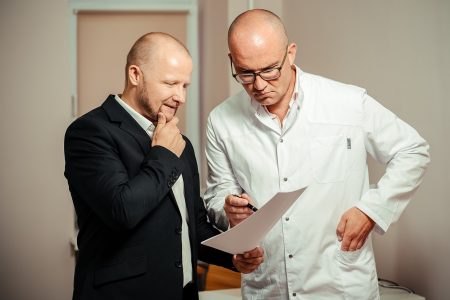 Upon examination, the doctor discovered that the man had “thrombosis of the deep dorsal penile vein.” In layman’s terms, there was a blood clot in the middle of his shaft.

And this wasn’t just a minor obstruction either. According to Morteza Bagheri’s article, there was no blood flow in the penis vein whatsoever.

We probably don’t need to tell you that having no blood flow isn’t good news for any part of your body. And it certainly wasn’t good for the man’s genitals.

The doctors immediately prescribed rivaroxaban — a blood thinning medication — to the poor man. Lucky for him, the drugs worked.

“Two months after starting the treatment, patient’s symptoms were completely disappeared and he had no penile pain during erection and sexual disturbances anymore,” wrote Morteza Bagheri.

All’s well that ends well. The man didn’t lose his little guy to gangrene and is able to satisfy his wife again.

He’d probably better keep it vanilla, though. Morteza Bagheri noted that the man still feels mild pain at the site of the blood clot upon pressure.

But what makes doctor’s say that the man’s penis pain was a result of COVID? Couldn’t it have been caused by pretty much anything else?

In theory, yes. But the fact of the matter is that there is no other reasonable explanation.

The man’s medical history showed no indication that he was prone to suffer from blood clots. Neither had he received any injuries that could’ve caused the clot.

On the other hand, COVID-19’s tendency to cause blood clots is well documented.

“Roughly, 20-50% of hospitalized patients with COVID-19 infection have abnormal coagulation tests … which can cause thrombosis and microvascular occlusion,” Morteza Bagheri wrote.

However, this is the first time doctors have seen COVID cause deep vein thrombosis. So, the Iranian man had the questionable honor of making medical history.

May his sacrifice help any others who may encounter the same problem.

Although the Iranian man’s case is rare, it’s not the first occasion where men around the world have suffered from COVID-related penis problems. The Sun reported one such case in March 2021.

A 69-year-old Ohio man, hospitalized and placed on a ventilator due to COVID, suddenly got an erection that lasted for three hours. The culprit was, as you probably guessed, a blood clot.

When ice packs failed to help the man’s penis calm down, the doctors eventually had to use a needle to drain the blood from this shaft. Although that solved the erection problem, there’s no happy ending — the man later died after his lungs stopped working.

In July 2020, a 62-year-old Frenchman experienced a similar emergency. He had been rushed to the hospital due to COVID-related respiratory failure and the doctors were hooking him up a ventilator.

That’s when they discovered that the sedated man had “previously unidentified priapism,” wrote The Sun. In other words, his flag was at full mast.

The doctors again tried applying an ice pack, but even after four hours the treatment had no effect. So, out came the needle again.

As the doctors drained blood from the man’s penis, they discovered multiple dark blood clots. They concluded that the clots were due to COVID.

Let these cases be a warning to every man out there. Stay safe — you have a lot at stake.