Do you love pasta? I mean, who doesn’t? Here are a bunch of fun facts that you probably don’t know, even if you are a noodle lover.

Spaghetti, macaroni, and penne are the three most popular pasta shapes on 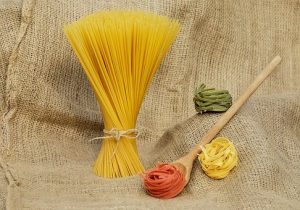 the market today. Spaghetti is the most popular by far, and accounts for two-thirds of all noodles in production today.

Brooklyn, New York was home to the first pasta factory in the United States. The company Zerega was founded by a French immigrant named Antione Zerega. It was founded in 1848 and is still making it today, although the factory is no longer located in Brooklyn.

Barilla is the most popular brand sold in Italy. Barilla sales are high in the United States as well and account for 25% of all dried pasta sold.

Most dried pastas are made of only two different ingredients, semolina flour 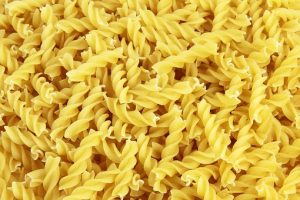 and water. Some other varieties use eggs such as fresh, egg noodles, and some other dried varieties. Typical and standard pasta just uses the two ingredients and is just a paste of flour and water.

Pasta comes from the Italian word for “paste.” This is because of the “paste” that makes the noodles. Because flour plus water equals paste and therefore, equals pasta.

There is a World Pasta Day and it’s celebrated on October 25th. But if you are 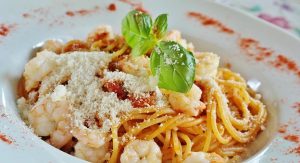 wondering when National Spaghetti Day is, then you will have to wait until January 4th for that.

Spaghetti comes from trees, or so people were made to think! The BBC aired a spoof documentary about spaghetti crops in Switzerland that showed farmers harvesting spaghetti from bushes.  The special was shown on April 1st, 1957. Yes, April 1st as in April Fools Day. The video was met with confusion though and a good amount of people wanted to know where they could buy their own spaghetti bush. Ha!

A typical portion of spaghetti should be no more than 100 grams. But to put this into perspective, a portion of pasta you would get at Olive Garden is 700 grams. Yike.

Yes, there will most definitely be a part two.

Approximately 350 shapes of pasta exist. Also, it’s estimated that there are 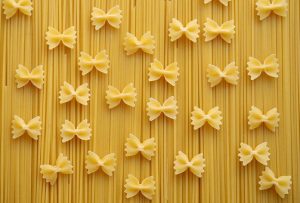 about four times as many names for the pasta as there are shapes. Spaghetti, wheels, fettuccine, and rigatoni are just the start.

Al dente noodles have the best taste, and it keeps you the most satiated. This is because al dente pasta takes longer to be digested than overcooked or even fully cooked noodles. This is what makes you feel fuller, longer.

Before there were machines to make the noodles, the dough was kneaded by 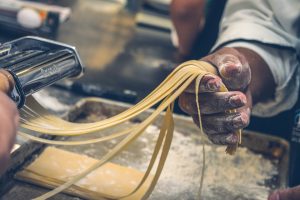 foot. Anyone who has made homemade pasta dough knows how tough it is. Workers would have to walk over large batches of dough to knead it and “a full day’s walking” was needed to make a single batch.

Spaghetto is the singular word for spaghetti. And FYI, most Italian words that end in “O” are singular, where words ending in “I” are plural.

What is your favorite fact so far? Watch for part two so that you can learn more about this delicious dish we all know and love.