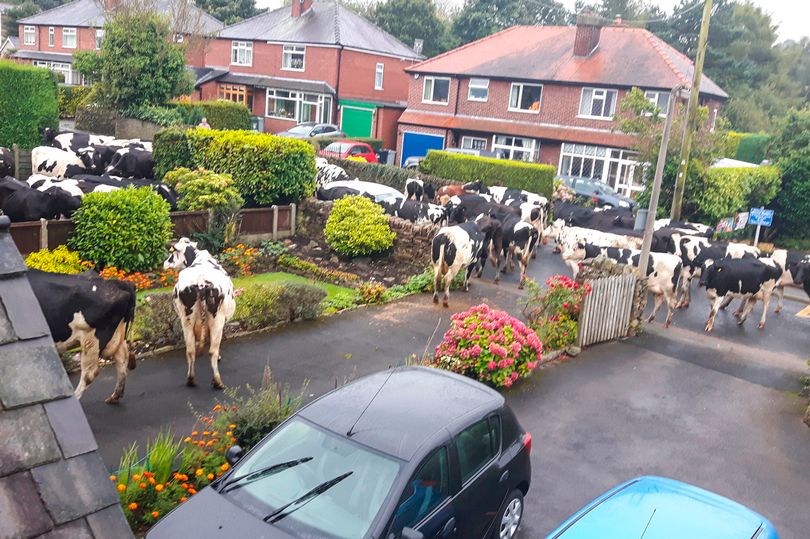 Janis Wilson, a 61-year-old grandmother of five, woke to the sights and sounds of more than 40 cows wreaking havoc on her street in Bollington, Cheshire. She was enjoying a cup of tea on a quiet Sunday morning when she heard a lot of “mooing” coming from her front yard. She looked out to see the source of the commotion and was shocked discover the cows headed in her direction. Her partner, 61-year-old Steve Loxam, rushed out to stop the stampeding cattle from ruining their garden. Other residents joined together to herd the beasts back to the pavement. They were walking through gardens and destroying entire flower beds as they moved into the street.

According to Janis, the cows were doing what cows do—grazing and eating all her plants. Some of them were brushing against cars and dropping manure on driveways. During the commotion, she remembered to grab her camera to take a few pictures. (After all, it’s not every day you see a head of 40 cattle on your front lawn.) On top of everything else, amid all the chaos, romance was blooming for some of the cows—and we don’t have to tell you what happened next.

The entire episode lasted for nearly half an hour before Cheshire police arrived to save the day. Janis and the residents of Bollington told officials they had no clue as to the origin of the herd. Some speculate that someone left a nearby farmer’s gate open, which led to the fiasco.

To Janis’s surprise, Steve found the entire thing to be hilarious, and the procession certainly brought some energy into the sleepy village with its residents banding together to keep the cows from destroying their property. Although no one was hurt in this bizarre event, it created a significant amount of hardship for some of the people involved. Janis’s 93-year-old neighbor had to clean his entire driveway after the cows made a mess of it.

According to a statement made by officials, they were able to safely herd the animals into a field before anybody, including the cows, could get hurt.