What has big feet, roams around the foods, and suffers from a chronic condition of appearing blurry in photographs? That’s right, it’s Bigfoot.

Also known as Sasquatch, this mysterious woodland creature has thrilled cryptozoologists for decades. But now, an Oklahoma state representative is taking the hunt for Bigfoot to a whole another level.

Justin Humphrey – a Republican representative of the Antlers/Hugo area – has filed a bill that would establish an official Bigfoot hunting season. How official, you ask? Official enough to have licensing fees.

The bill introduces itself as “an act relating to game and fish, directing the Oklahoma Wildlife Conservation Commission to establish a big foot hunting season.” Should the bill pass, it would become effective from November 1 onward.

“The Commission shall set annual season dates and create any necessary specific hunting licenses and fees,” the bill reads. 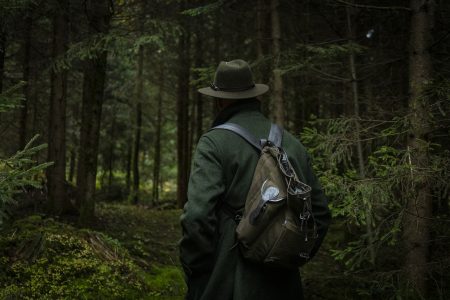 Not Out for Blood

But hold on for just one hot minute! There’s something off about that phrase, “hunting season.”

Does Rep. Humphrey want this (potentially) gentle Sasquatch’s head on his wall? Well, not exactly.

According to a Facebook post by journalist Lacie Lowry, Humphrey didn’t mean literal hunting. He told her that he “doesn’t want people to actually kill Bigfoot.”

Humphrey said he will be working with Oklahoma wildlife and tourism departments to tweak the bill’s wording to reflect its true intention. That is, he wants Bigfoot trapped or captured using non-lethal methods.

The representative is also looking to secure $25,000 in funding to provide a prize for the first person to capture Bigfoot.

The general public had some divided opinions about their representative’s bill. A good majority found the idea ridiculous, and they didn’t mince word in expressing their opinion.

“This is why it’s important to make sure our state legislators get their vaccinations before others. They have important work to do, like this bill. Nice to see we’re getting all the important stuff out of the way early! That’s our tax dollars at work!” one person said in a Facebook comment dripping with sarcasm.

“Our public schools are broke but he wants a Bigfoot season,” another person said.

“Who are the people responsible for voting for this guy?” one more commenter wondered.

Indeed, the waste of taxpayer money was the most common concern people voiced. But others thought that the bill could actually bring some much needed funds to Oklahoma’s wildlife services.

“This actually could possibly be a clever move, a way to provide more funding for the Wildlife department. As I understand, any funding to the department comes strictly from fees and licenses, so this would help further fund our state’s wildlife conservation,” one commenter mused.

“All you geniuses aren’t smart enough to see how much money this will bring to the wildlife [department],” another person said, slightly less tactfully.

But there was yet another group of people with a specific concern. Namely, they raised the question of whether hunting or trapping Bigfoot would be ethical, if he indeed exists.

“If such a creature does exist, they are obviously very intelligent, as they’ve been able to elude humans for centuries, and should not be subject to hunting,” one commenter opined.

“Seems like it would be an endangered or protected species,” another one said succinctly.

As outlandish as Rep. Humphrey’s bill seems, it far from the first time U.S. officials have taken an interest in Bigfoot. In fact, in June 2019, the FBI itself released documents detailing the agency’s Bigfoot investigation.

The FBI carried out the research between 1976 and 1977. So, by the time the documents got to the public, they were already four decades old.

The investigation got its start when Peter Byrne, then-director of the Bigfoot Information Center contacted the FBI. Byrne wanted to know whether the bureau had performed forensic examinations on hair and tissue samples that supposedly belong to Bigfoot.

When Byrne got a response that the FBI had in fact not conducted any research into the Sasquatch, Byrne took the liberty of asking them to do so. It must’ve been a slow week at the FBI, because they complied.

Jay Cochran Jr., the assistant director of the agency’s laboratory division, wrote back to Byrne. In an FBI internal memo, he noted that the investigation would be carried out “in the interest of research and scientific inquiry.”

Byrne sent 15 samples of material to the FBI. According to him, the hair and tissue remnants were “the first that we have obtained in six years which we feel may be of importance.”

The FBI analyzed the samples, and got back to Byrne with the results. So what did they find?

Unfortunately, the hair and tissue samples didn’t come from Bigfoot. Instead, they belonged to some kind of a deer.