This year’s period of Lent started this week. During this time, adherents of some Christian denominations are supposed to give up one or more earthly pleasures in remembrance of Jesus’ sacrifice.

Food has traditionally been a significant part of Lent. Christians are encouraged to give up eating meat, and to fast in preparation for Easter.

Abstaining from alcohol is another popular way to observe Lent. But one Ohio man has combined alcohol and fasting in an imaginative way.

He’s not abstaining from alcohol, though – far from it. Del Hall from Cincinnati has given up all food and most other beverages and subsists only on beer.

He does allow himself to also drink water, black coffee, and green tea, but that’s it. For the next 46 days, Hall’s only source of calories is that sweet, sweet barley juice.

It seems like an extreme stunt, but it stands to scrutiny when you take into account Hall’s character.

It’s not the first time Hall is going beer-only, either. This is the third year in a row that he undertakes his unique Lenten fast. 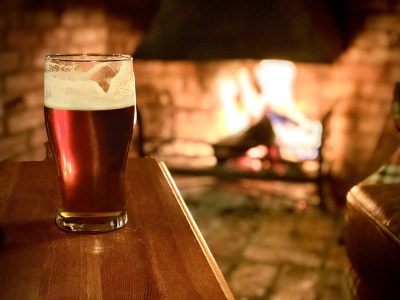 Hall’s beer fast isn’t completely without precedent. But to find a similar tradition you’ll have to turn the clock back several centuries.

Indeed, late medieval and early Renaissance monks used to brew a special bock beer that provided most, if not all, of their calories during Lent. In addition to upholding ancient traditions, Hall says his beer fast is about challenging himself.

“Fasting is a big part of being human and we don’t really do that anymore,” he explained.

The 46-year-old isn’t constantly cracking open cold ones. Lent is about moderation, after all, and boozing it up around the clock would pretty seriously violate that principle.

“It’s not like I’m drinking constantly. I only have three to five beers a day,” Hall told Fox 19.

For those curious about such facts, the USDA says that on average one can of beer contains 154 calories. That puts Hall’s daily caloric intake between 462 and 770 calories, more or less.

That’s a far cry from any recommendations. But then again, that’s kind of the point, isn’t it?

Keeping His Gut in Check

Now, an all-beer diet can’t be called healthy by any means. But Hall says that he has actually seen several benefits from it.

Beer might be associated with developing an impressive belly, but – perhaps unsurprisingly – Hall loses a lot of weight during his fast. He said that every year, he’s lost somewhere between 40 and 50 pounds.

In addition, his cholesterol and blood pressure drop significantly during the fast.

“The human body is an amazing thing,” Hall mused about his weight loss.

“We’re used to going through as hunter-gatherers, feast and famine. The problem is we don’t go through the famine anymore,” he said.

However, subsisting only on beer will bring its own problems. For example, having even a single beer will hit you differently depending on how full your stomach is.

“One beer today will affect me way differently than it will in a week. I kind of really have to stay cognizant of that,” Hall admitted.

Driving to places is also a no-go for any responsible person after having alcohol. But Hall has that covered too – last year he reached Platinum status on Uber from taking so many rides through the service.

But do Halls’ claims about health benefits stand up to scientific scrutiny? Well, yes and no.

According to Healthline, a moderate beer intake can help the body remove bad and increase the amount of good cholesterol in the body. It might also lower the risk of heart disease, improve blood sugar control, boost bone density, and reduce dementia risk.

However, that only applies to moderate consumption, defined for males as two drinks per day and for females as one drink. More than that and you could start seeing negative effects.

First and foremost, overindulging in alcohol could simply make you more likely to die. In addition, excessive alcohol consumption damages your liver, and can cause depression, cancer, and weight gain.

All we’re saying is that a doctor probably wouldn’t recommend the Hall Brand Beer Diet. But it seems to work out for him.

Hall does have one more reason to subsist on beer in addition to observing Lent and challenging himself. He wants to raise funds for the bars, breweries, and restaurants that are struggling due to the coronavirus pandemic.

Hall himself is a co-owner of the 16 Lots Brewery in Mason, OH. He knows firsthand how badly the pandemic has ravaged bars and breweries, and that’s why he set up an online fundraising account.

After Lent, Hall intends to distribute all the money he raised evenly with all bars and restaurants that have asked to be part of the fundraiser. Joe Frank, co-owner of Cincinnati bar Fowling Warehouse is one of them.

“This industry was damaged. What Del’s doing for the bar and restaurant workers, it’s awesome,” he told Fox 19.

Describing his own establishment’s situation, Frank said his employees were hit the hardest.

“The business itself, from an ownership standpoint, there’s loans and things you can get. But the employees only had a small window of help from the government,” said Frank.

If you have a restaurant or bar that would like some help from Hall, you can contact him on his Instagram. But if you’re impressed by Hall’s beer fast and would like to make a Lent donation, you can do so at Sgt. Del’s Virtual Tip Jar on GoFundMe.