You’d generally expect a bratwurst festival to be a good time. You eat some good sausage, drink a few beers, and pretend to be just a little bit German for a few hours.

But the Bucyrus Bratwurst Festival got embroiled in some royal drama this year. Just 10 days before the festivities, the reigning bratwurst queen was booted off her throne.

The festival queen traditionally reigns over the three-day event. She kicks off the event with the ceremonial first bite of sausage and in general acts as the face of the festival.

But the reign of Abigail Brocwell, 21, was cut short this year. She got caught attending a luncheon organized by another food festival — an unforgivable sin for a Bucyrus Bratwurst Queen.

Brocwell’s duties were transferred to the runner-up of last year’s festival, Natalie Stover. However, the now-crownless queen doesn’t seem ready to give up her throne without a fight.

According to The Columbus Dispatch, both Brocwell and the festival have lawyered up. Being the queen is serious business, after all. 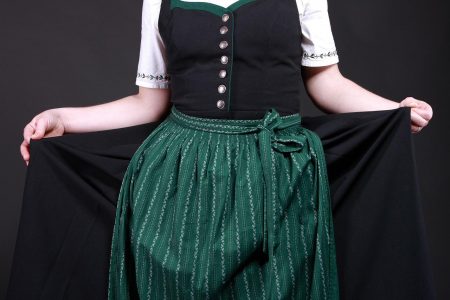 All Fun and Games… Right?

The Bucyrus Bratwurst Festival has taken place in the northern Ohio city since 1968. According to the event’s website, Bucyrus is widely known as the Bratwurst Capital of America among people who know a lot about bratwurst.

The festival is a big deal, though. Every year, 100,000 visitors attend the three-day celebration of all things bratwurst.

Over the three days, festival-goers can enjoy good food and drinks, alongside vendors, rides, parades, and various contests. There are various competitions, from wolfing down the most bratwurst (naturally) to possessing the longest pigtails.

But one of the highlights of the event is the crowning of the new festival queen. Traditionally, this event takes place on the first night of the celebration.

One part of the royalty pageant’s judging includes evaluating the authenticity and quality of the contestants’ dirndls. In case you have no idea what that is, it’s a traditional dress from the German sphere consisting of a bodice, a blouse, a full-length skirt, and an apron.

In 2021, Brocwell charmed judges and was crowned the festival queen. As such, she was set to preside over this year’s event.

But that all changed when Brocwell attended the Baltimore Festival Queen’s Luncheon. As per the rules of the Bucyrus Bratwurst Festival, that’s a big no-no.

On August 3 — about two weeks before this year’s festival — the organizers told the royal court that they could no longer attend other festivals around the state representing the Bratwurst Festival. As far as we could find out, no further justification for the travel ban was given.

Naturally, this caused some confusion among the queen and the princesses. They asked the Bratwurst Festival organizers if they could attend other events on their own — as commoners, if you will.

The organizers gave them a thumbs-up, as long as they didn’t wear their dirndls, crowns, sashes, or otherwise present themselves as representing the Bratwurst Festival. They also claim that the royal court was specifically told not to attend luncheons, “as luncheons are events reserved exclusively for visiting royalty and are not open to the general public.”

But on August 6, Brocwell attended the Baltimore Festival luncheon. According to the Bratwurst Festival, this was a clear violation of her duties and responsibilities as queen.

Therefore, she was stripped of her crown.

Not There as a Queen

But if you ask Brocwell, she has done nothing wrong. The now-crownless queen claims that she didn’t attend the luncheon in any official capacity.

“They wrote my name down and wrote ‘visitor’ underneath it and we paid with our own check,” Brocwell claims.

To defend her name and honor, Brocwell has hired lawyer E. Roberta Wade. And Wade has produced evidence in support of the dethroned queen.

The letter states that Brocwell was welcome as long she didn’t wear her Bratwurst regalia and paid for her own entry. And indeed, photos from the luncheon show Brocwell wearing a black dress, while receipts show that she did pay for herself.

Despite the evidence, the Bratwurst Festival decided to move on without Brocwell. On August 18, a new queen — Hannah Feldman — received her crown.

According to media reports, Brocwell has retained Wade as her legal advisor. Whether or not the row ends up in court, we couldn’t tell you.

But we have learned not to cross sausage-related royalty.