An older Russian tourist was bitten in the butt and nearly drowned after an “awful” attack by an aggressive sea turtle. She told her story of the bizarre encounter in a video that’s making its way around the internet.

“It was really scary,” Lidia Bazarova, 64, said of the encounter. She was swimming in the ocean near the popular Güzeolaba Resort in Antalya, in west Turkey.

Turns out she was only 10-12 feet from the shore. She felt something grab her “backside” and tried to drag her under.

It was non other than a sea turtle. 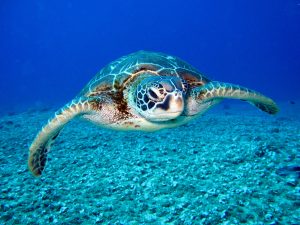 Bazarova said that at one point, the sea turtle released her, only to come back and bite her again, even harder. “I don’t know how long it lasted,” she described of the incident which finally ended after a “rescuer” spotted her in trouble.

Lifeguard Mustafa Sari rushed toward Bazarova and started “yelling” at the creature, according to her account of the story. The loggerhead sea turtle released its grip on the elderly woman, after the distraction from Sari and once she was released, she “raced towards the shore” in a state of shock.

“I was fighting my pain and my fear,” described an aghast Bazarova.

Sari did eventually battle off the beast of the seas, but not before getting a nasty bite himself, in the shoulder. Bazarova was bitten on her fingers, hips, legs and butt, making sitting incredibly uncomfortable.

“We thank the lifeguard,” Kamila chimed in. “Without him, maybe the result would have been bad.”

While her injuries aren’t life-threatening, she says that she may never go into the water again. “I’m not sure I’ll ever be able to get back in the sea,” she said. As an ocean lover, she reports that she visited that particular swimming spot nearly every other day leading up to the attack.

These sea turtles are a danger and are known to be aggressively territorial. There have been 11 sea turtle attacks in that area in the past two weeks alone.