Humans seem hardwired to seek ways to alter our states of consciousness. From absolutely disgusting alcoholic beverages to inventive designer drugs, we’re always on the lookout for some method to get high.

But at times, people decide to go for the all-natural, ancient methods. And one of those now has the National Park Service (NPS) concerned.

In fact, the agency felt the need to put out a public notice of it on Facebook. The NPS is pleading for hikers to stop catching and licking Sonoran desert toads.

In some places, people have been catching the toads to the point that authorities are considering upgrading their conservation status. But it’s not only the toads that they’re putting in danger.

The stuff on the toads that could potentially get you high is really a toxin. And licking that is generally not a healthy idea.

So, let us echo the NPS here and respectfully ask all Oddee readers — please don’t lick toads you find in the wild. 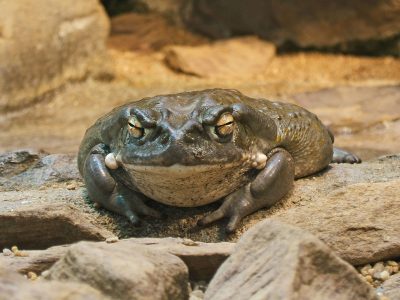 But let’s take a step back here. What even are these toads in the first place?

Well, the toad in question is the Sonoran desert toad. It’s fairly easy to recognize —these are the largest native toads in all of the U.S.

Also known as the Colorado River toad, these amphibian giants can grow to be up to seven inches long and quite rotund. They live in the woods, shrubs, and grassland of Arizona, California, Colorado, and New Mexico.

They’re actually quite useful critters. The toads are ravenously carnivorous and can control the population of crop pests, like snails, with their appetites.

But that’s not what you’re interested in, is it? You want to know how people are getting high off the toads.

The secret is in the toads’ secretions. They possess parotid glands behind the eyes that ooze a sticky white mucus, loaded with two compounds — bufotenine and 5-MeO-DMT.

And as we already mentioned, these two chemicals are toxins. They’re very dangerous, particularly to animals.

As a defensive mechanism, the toad spreads the goo all over its skin. It’s potent enough that one toad can kill a fully-grown dog.

Humans, however, have in our ingenuity figured out that the toads’ secretions can have psychoactive properties. That comes with a caveat, though.

In order to make the toxins “safe” for consumption, they need to be collected and processed. We don’t know how that works — and we wouldn’t tell you even if we did.

In the end, though, the secretions would be turned into a powder for people to snort or smoke. And this is where the issue lies.

You may have heard the urban legends that you can lick these toads to get high. And so have the people going after them in the wild.

But the problem is that in their raw form, the secretions are simply poison. If you go to French kiss some toads, you’re less likely to see them turn into princes and more likely to suffer nausea, seizures, anxiety — or death.

“As we say with most things you come across in a national park, whether it be a banana slug, unfamiliar mushroom, or a large toad with glowing eyes in the dead of night, please refrain from licking,” the NPS said in its warning.

Threatened Due to Drug Trade

If you do find a toad and lick it, you’re much more likely to harm yourself than the toad. But then again, there are some people who know how to process the toads.

And that is leading to damage. Some toad hunters find and kill the frogs for their skin and secretions.

As a result, the toads are facing increased pressure. Although they’ve been endangered in California for a long time, they’ve so far faired well in Arizona, Colorado, and New Mexico.

But thanks to toad hunting, that is changing. The New Mexico Department of Game and Fish is now saying that the Sonoran desert toads are threatened due to people collecting them to make drugs.

So, for the benefit of both yourself and the toads, don’t lick or collect them. Please and thank you.